Many humanitarian activities has been primarily targeted those affected by Covid-19 and natural disasters in the central region. In this week, ethnic minority women whose livelihoods have been severely impacted by Covid-19 in Quang Tri province received cash assistance this week as part of Ireland's support to Covid response in Vietnam. 44 households in Dak Rong District, will benefit from this support which was distributed through an ongoing partnership between the Embassy of Ireland and UN Women that aims to empower ethnic minority women and girls in remote communities.

Recently, 75 flood resistant houses were handed over to residents in Vinh Linh district, the central province of Quang Tri, under a project funded by the International Red Cross and Red Crescent Movement (ICRC).

Construction of the houses lasted from May to November 2021 in Vinh Khe, Vinh Ha and Vinh O communes, Vinh Linh district.

The project targets households whose houses were damaged by floods last year, with priority given to poor and near-poor households, and other social policy beneficiaries.

Each of the house was built at a cost of VND 75 million (USD 3,300) that came from the ICRC, the Vietnam Red Cross Society, local authorities and people. 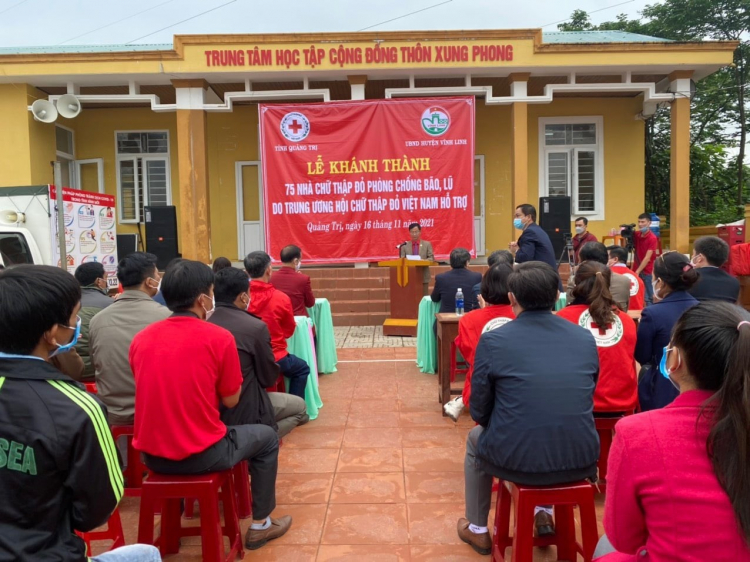 Overseas Vietnamese in Italy have sent nearly VND 300 million (around USD 13,200) to the Vietnam-Italy Friendship Association, to repair a school for children with disabilities in Le Thuy district of Quang Binh province and a kindergarten in Huong Hoa district of Quang Tri province and help these schools replace equipment damaged by flooding.

At the beginning of 2021, Vice Chairman of the Vietnam-Italy Friendship Association Tran Thanh Quyet and former President of the Vietnamese Students’ Association in Italy Phan Hoang Nam visited the schools to survey their needs and develop plans for the repair. The repair was completed last month, thus improving the learning environment for local students.

Earlier this year, about VND 80 million (USD 3.500) sourced from a fund for central Vietnam has been used to aid Vietnam’s Covid-19 response efforts. As a non-governmental organization working to address the legacies of war, PeaceTrees Vietnam also always make effort to support the goal of community development, bringing a better future to the people. With more than 16 years of implementing a scholarship program for students who are children of landmine accident victims in Quang Tri, since the past few years, PTVN has expanded recipient groups to female ethnic minority students, students with disabilities or children of people with disabilities, students with difficult living circumstances having good study results. Levels of education are from primary school to university and college. The program location was also expanded to Quang Binh province.

In October & November 2021, we continue the PeaceTrees Vietnam Scholarship program, school year 2021-2022 in Quang Tri. There were 236 students awarding scholarships, with a total value of more than VND 760 million (USD 33.500).

Speaking at the scholarship awarding ceremony, Nguyen Trieu Thuong, director of the Department of Foreign Affairs of Quang Tri province, showed the acknowledgment and highly appreciated the meaningful and practical activities of PTVN to address the consequences of war in general and to support and accompany with the students of the province in particular over many years.

In the coming time, PTVN will cooperate with partner agencies in Quang Binh to continue award scholarships to students who are children of landmine victims in the province.

PTVN scholarship is expected to continue to be a practical support for students to have better study conditions as well as bring them motivation and encouragement to keep trying harder for a bright future.

Public diplomacy will continue to help alleviate the pain of Agent Orange victims...