Ambassador Le Thi Tuyet Mai, Permanent Representative of Vietnam to the UN, the World Trade Organisation, and other international organisations in Geneva, attended the opening ceremony of the UN Human Rights Council’s 47th session, which is taking place from June 21 to July 15. 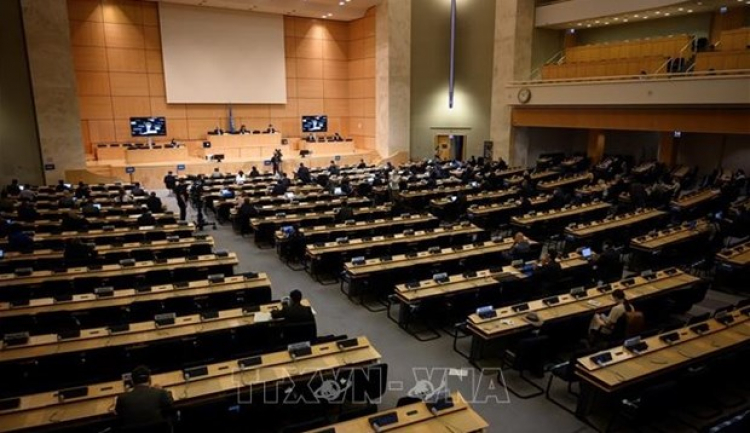 Ambassador Le Thi Tuyet Mai, Permanent Representative of Vietnam to the UN, the World Trade Organisation, and other international organisations in Geneva, attended the opening ceremony of the UN Human Rights Council’s 47th session, which is taking place from June 21 to July 15.

She expressed the country's support for the work of the High Commissioner and the UN's human right mechanisms, as well as for conducting practical, constructive dialogues on human rights issues, while emphasising human rights should not be politicised to interfere in internal affairs of sovereign states or to criticise nations.

Regarding Vietnam’s fight against the COVID-19 pandemic, Mai said that Vietnam has made every effort to ensure the people’s enjoyment of basic human rights, with the highest priority given to the protection of lives and health of people, especially vulnerable groups, while maintaining economic growth.

The ambassador stressed that the COVID-19 vaccine fund established by the Vietnamese government and widely supported by its people is one of the measures that Vietnam has taken to promote its national vaccination strategy towards inclusive post-pandemic recovery.

The Vietnamese representative also called on countries to exert efforts to speed up the vaccine production process to ensure timely and equal access to vaccines to effectively control the pandemic.

Vietnam is planing to participate in organising a debate on the rights of the elderly amidst climate change. On behalf of the core group comprising Bangladesh, the Philippines and Vietnam, the country will introduce a draft resolution on climate change and human rights in 2021, focusing on vulnerable groups.

The resolution has been introduced annually since 2014 to seek the UN Human Rights Council’s approval, with different themes for each year. Vietnam’s active engagement in the compilation and adoption of the resolution as well as in the activities of the core group reflects its efforts in responding to climate change, and contributes to the implementation of its foreign policy of addressing common issues of the international community in a proactive, active and responsible manner.

Addressing the opening session, UN High Commissioner for Human Rights Michelle Bachelet proposed countries place support for the full spectrum of all human rights at the heart of every society's capacity to recover from the pandemic emergency – and at the core of the work of all UN bodies and teams.

She urged nations to consider COVID-19 vaccines as a common asset and stressed that the equal and wide distribution across the globe is a prerequisite for the world to soon control the pandemic./.

President Nguyen Xuan Phuc on February 26 sent his condolences to families of the...

Some 60 delegates representing the police, courts, procuracies of the Women's Union,...