Given special geographical and job conditions, many constituencies nationwide have been allowed to hold early voting so that their voters can exercise citizens’ rights and responsibilities. 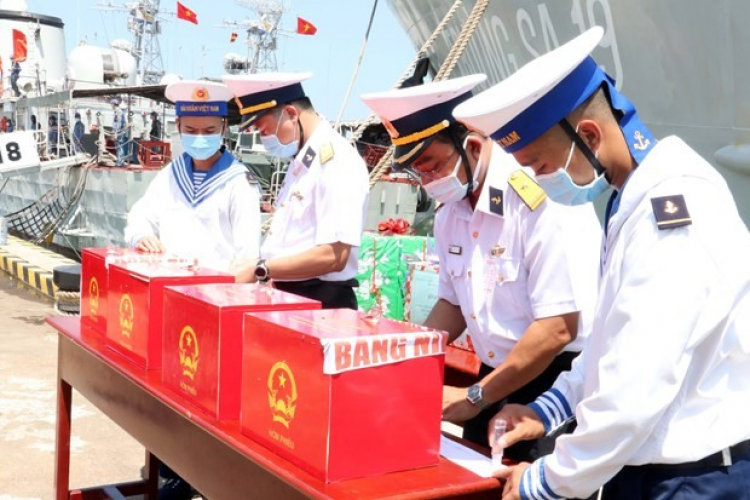 Naval officers and soldiers seal ballot boxes in Ba Ria - Vung Tau province on May 4 before leaving to organise early voting for the forces working at sea. (Photo: VNA)

According to Article 72 of the law on election of deputies to the National Assembly (NA) and People’s Councils, in special circumstances that call for the voting date to be delayed or early voting to be held, election committees will propose the National Election Council (NEC) consider and make decisions.

Basing on the proposals submitted by local election committees, the NEC has permitted certain constituencies in 12 provincial-level localities, namely Hai Phong, Can Tho, Ba Ria - Vung Tau, Binh Dinh, Ca Mau, Dak Nong, Hau Giang, Kien Giang, Khanh Hoa, Quang Nam, Quang Binh, and Nghe An, to conduct voting ahead of the scheduled date for the elections of deputies to the 15th NA and all-level People’s Councils for the 2021-2026 tenure on Sunday May 23.

Plans quickly made to prepare for early voting

Right after the NEC gave the green light to the early voting, the election committees of the 12 localities and their agencies and organisations have promptly made plans to organise advance polling and step up communications about the elections.

The time for advance polling has been set in line with Article 71 of the law on election of deputies to the NA and People’s Councils.

On May 4, the Election Committee of southern Ba Ria - Vung Tau province organised voting for officers, soldiers, and workers of local units of the navy, coast guard, and fisheries resources surveillance forces, along with staff on oil rigs, and fishermen working for a long time at sea.

On the day’s morning, the voting took place solemnly and seriously in five constituencies in the province, all in Vung Tau city, which were also the first to hold voting in Viet Nam.

Also on May 4 morning, at the terminal of Naval Brigade 171, Naval Region 2 and the Ba Ria - Vung Tau Election Committee held a ceremony to see off two delegations leaving to organise advance voting at offshore economic, scientific and technical service stations on the southern continental shelf, also known as DK1 platforms, and vessels on duty at sea.

The Election Committee said the province has more than 3,120 voters casting ballots ahead of the official election date. The voting was carried out in line with regulations with the participation of all of those in the voters’ lists. COVID-19 prevention and control measures were also implemented at polling stations.