More than 100 representatives, mostly men from agencies and departments including the Ministry of Public Security, Ministry of Foreign Affairs, Ministry of Labor, Invalids and Social Affairs, Vietnam Women's Union gathered at a breakfast to discuss solutions for improving the delivering quality of coordinated services in response to violence against migrant women. Measures to improve inter-sectoral coordination mechanisms in response to violence against migrant women were discussed at the 6th White Ribbon Breakfast held in Hanoi on December 1.

The discussion aimed to promote joint efforts of individuals and ministries in developing coordinated services that minimize the damage caused by violence, as it not only affects women and children, but also at great cost to men, and especially to the national economy and social security. Each agency and ministry is a puzzle piece that make up a big picture, join hands to spread the messages: For a prosperous, equal and growing Vietnam; Realizing women migrant workers’ rights and opportunities; and Men are a part of the solution to end the violence against women and girls.

This is an event by Vietnam Women's Union, Center for Women and Development and UN Women Vietnam.

In her opening remarks, Director of the Centre for Women Development (CWD) Duong Ngoc Linh said although Vietnam has been hailed has a nation with marked achievements in gender equality, gender-based violence remains a big challenge for the nation nowadays.

According to a national survey on violence against women in 2019, 63 percent of married Vietnamese women experienced one or more forms of physical, sexual, emotional or economic violence and controlling behavior by their husbands. 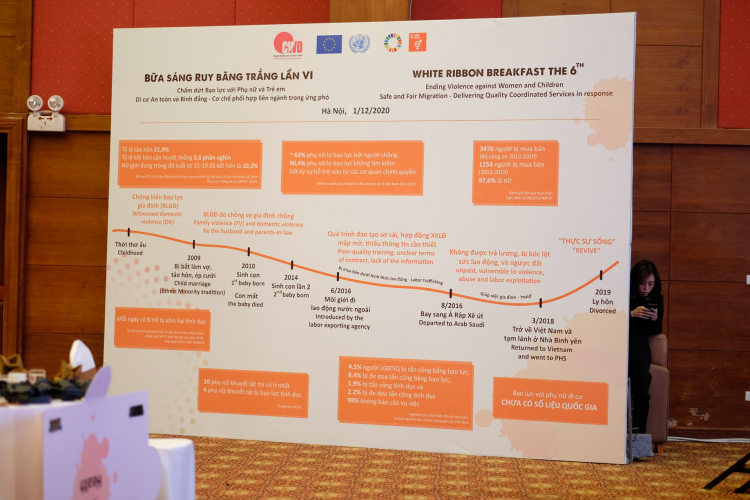 Graph about a gender-based violence victim's life, who has now returned to Vietnam and received help from the Peace House Shelter. Photo: UN Women/Ngoc Duong

During 2010-2020, the CWD’s Peace House model provided consultation on issues related to women’s rights and prevention of gender-based violence for more than 14,000 people, Linh said, adding 24.5 percent of the cases had close connection with prevention of human trafficking and migration.

Beside language, culture and law barriers, migrant women have no access to official employment channels as well as rights of migrant workers, and have no skills to protect themselves from human trafficking and gender-based violence, she added.

He added elimination of violence against women will help them feel more secure and work more effectively.

Country Representative of UN Women in Vietnam Elisa Fernandez Saenz laid stress on the migrant female workers’ contribution to the economy of the host nation, adding they are facing various challenges such as violence, sexual abuse, and labour exploitation.

It is necessary for competent ministries and sectors to realise their responsibilities and roles to respond to violence against women and children, and human trafficking, she added.

Over USD 11 million cash and donations in kind sent to...

USD 11.4 million has been donated to the Vietnam Fatherland Fronts at all levels...