A workshop on "Sharing solutions to find marketplace, support women entrepreneurs and connect businesses" has just been held in the Mekong Delta province of Ben Tre. 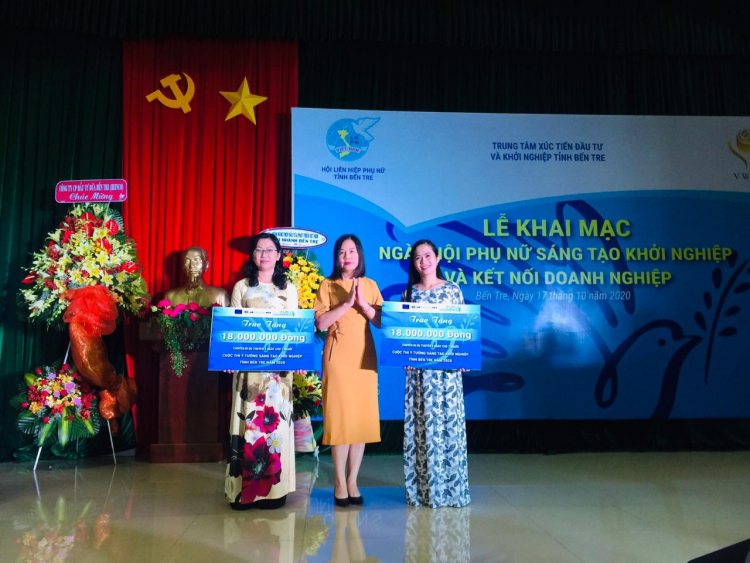 The workshop was organized in the series of activities of the Innovative Women's Entrepreneurship Day Program of the Women's Union of Ben Tre province, Ben Tre Investment Promotion and Enterprise Support Center (iPEC) and the Vietnam Women Entrepreneurs Council (VWEC).

On the occasion, UN Women presented 2 awards for the Innovative Start-up Idea Contest of the Women's Union of Ben Tre province.

Ben Tre is one of the leader in implementing the governmental project ‘Supporting national innovative startup ecosystems until 2025’. It is especially successful with its program ‘Dong Khoi – Starting Up and Developing Businesses’.

In 2016, the Ben Tre Provincial Party issued the Program No. 10-CTr/TU on ‘Dong Khoi – Starting Up and Developing Businesses’. After three years running, this program has achieved certain positive results, fostering the establishment of a true startup environment and freer investment environment in the province.

Thanks to various suitable policies and favorable conditions, many individuals dare open their own businesses while others also have excellent startup ideas to escape poverty. Several startup models such as shaping handicraft coconut, manufacturing bio-fertilizer from coconut peat, producing cosmetics from coconut, or making probiotics from bagasse pulp have been impressively fruitful.

One of the most prominent example of these startup successes is the small-scale business of Ngo Thi Hoang Oanh, located in Khanh Thanh Tan Commune in Mo Cay Bac District. After pursuing the major of business administration in Ho Chi Minh City, Ms. Oanh realized the potential of her hometown in creating cosmetics from coconut oil. In 2016, she and her husband established a family-scale company to produce lipsticks and soap.

Gender equality in workplace - key to the sustainable development of businesses