At the meeting with Provincial People's Committee. Source: Norwegian Embassy in Hanoi

The delegation was warmly welcome by the provincial leaders, and relevant departments of the Province.

The delegation met with headmasters of the five secondary schools from Cu M’gar district, which are implementing project “Behavioral change communication to reduce Child, Early and Forced Marriages (CEFM)" funded by Canada Fund for Local Initiatives (CFLI) in order to understand how the project helped change local people’s awareness and behaviours in relation to forced and close-blood marriages.

Under the Agreement, CFLI has funded 34,961.96 CAD for the Human Rights Research Center for Ethnic Mountainous Areas (HRC) to implement the project in 22 middle schools of Cu M’gar district, Buon Ma Thuot city.

The project mainly focuses on: mobilizing an innovative communication approach to change the perception and behaviors for all the 22 middle schools in Cu M’gar district; which will then change the awareness and behaviors of their families and communities to reduce CEFM; and empowering the students, both girls and boys,  to have enough knowledge and skills to become the real owners of the life by not getting married at an early age. Specifically, the students will then become the “ambassadors” to spread the messages of the project to their parents, families and their communities about the consequences of CEFM; which will significantly contribute to change the perception and behaviors of the entire society.

According to the Provincial People's Committee, Dak Lak currently has no investment cooperation activities with New Zealand, Canada and Norway. For Switzerland, from 2000 up to now, the province has received and implemented 18 foreign non-governmental aid with a total value of 824,132 USD. 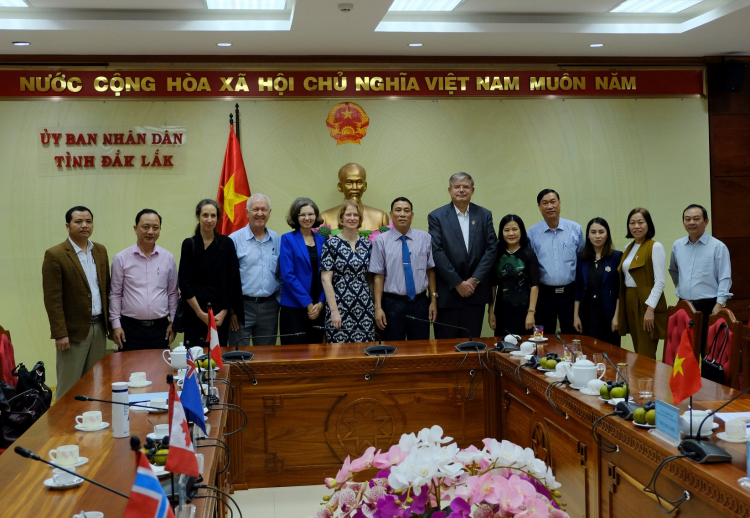 The aid of foreign non-governmental organizations is implemented according to the set schedule and framework. The projects were completed as planned and achieved good results, contributing to solving a number of socio-economic and social security issues such as improving livelihoods, health care quality and creating conditions to improve people's knowledge and life,etc.

The G4 Ambassadors and CDA also visited the site of the Project Strengthening the Business case of Small-scale Pyrolysis funded by the State Secretariat for Economic Affairs (SECO) of Switzerland and were introduced to a new technology to minimise agriculture waste through production of energy and biochar. The visit ended by meetings with religious leaders of the Ban Me Thuot Diocese, and the Protestant Church.

The G4 delegation also took this opportunity to taste the well-known local coffee and discovered the culture of the Ede ethnicity – one of the 49 ethnic groups living in the Province.

The G4 Embassies have worked together in Vietnam since 2001 on issues of shared interest, including human rights, particularly the rights of women, vulnerable groups, and ethnic minorities. The countries are also strong partners of Vietnam in the areas of trade, education, economic development and other areas.

The Government has decided to buy 21.9 million doses of Pfizer COVID-19 vaccine...

Knowledge about human rights will be put into the curriculum of all the educational...