Many projects and programmes tailored to promote gender equality in all sectors have been implemented in Viet Nam over the past decade, significantly contributing to changing the mindset of people on gender stereotypes and increasing the value of women and girls in the society, UNFPA Representative in Viet Nam Naomi Kitahara has said. Such projects cover a wide range of spheres like politics, economics, culture, information, health, education, science, and family, Kitahara stressed in an interview granted to the Vietnam News Agency (VNA).

According to the UNFPA Representative, Viet Nam is a signatory to international instruments on gender equality, women’s rights, and women’s empowerment. In 2006, the country promulgated the Law on Gender Equality which mandates Government bodies to fulfill their responsibilities on gender equality and to ensure that any gender-related violations are addressed.

Women and girls, who represent half of the population, are also half of the country’s potential for socio-economic growth, she said, noting that gender equality, aside from the fact that it is a fundamental human right, is essential for peaceful societies and sustainable development.

Kitahara highlighted achievements Viet Nam has recorded in gender equality such as the higher rate of women in the National Assembly, which is 30.26 percent in the 15th term in comparison with 26.72 percent in the previous tenure.

In employment, women’s participation in the workforce is almost as high as men’s (73.3 percent for men and 65.3 percent for women in 2021), she said, citing the numbers released by the General Statistics Office (GSO).

Asked about Vietnamese women’s role in modern society, she said it has changed tremendously.

“Modernisation and the advent of the latest technology have widened hope and opportunities for women and girls in Viet Nam,” she said.

“Many women have established themselves socially, politically, and economically in almost every field, and they have been successful.”

The UNFPA Representative, however, pointed out limitations in Viet Nam such as the prevalence of violence against women and gender-biased sex selection. 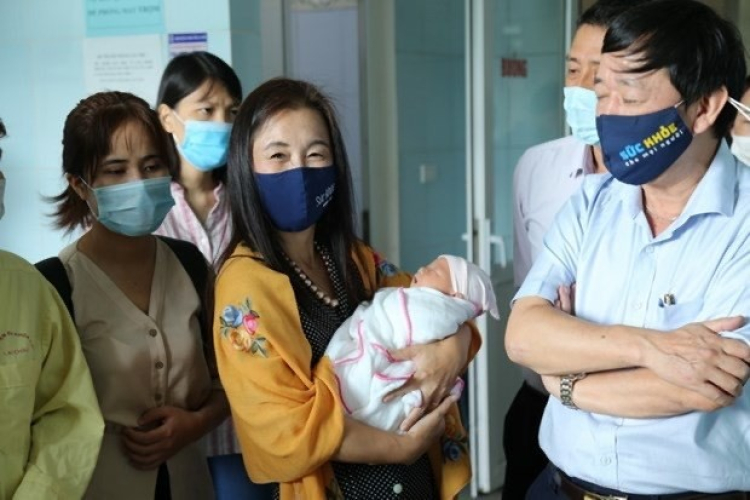 Given this, UNFPA has a set of recommendations to the national and sub-national health authorities.

First, in order to mitigate the negative impact of COVID-19 particularly among vulnerable groups such as ethnic minorities and migrant workers, the capacity of skilled birth attendants can be increased further, and their networks can be supported, who can also provide primary health care in the district and community levels.

Second, it is critical to improve the capacity of district hospitals and community health centres on emergency obstetric care in accordance with the national guidelines. On this, offline and online training and refresher training, also building on the tele-health infrastructure, would be useful.

Third, the COVID-19 prevention and control elements can be fully integrated into the provision of antenatal, delivery and postnatal care at all health facilities to ensure the continuity of essential service provision and utilisation.

And lastly, innovative interventions, such as tele-health services (first mobile app MCH247 as supported by UNFPA) and culturally-sensitive behavioral change communications should be tapped into for quality SRH services amongst vulnerable populations.

Kitahara said currently, UNFPA is working with Vietnamese ministries, other government agencies, the National Assembly and organisations to promote gender equality, particularly addressing gender-based violence and other harmful practices and ensuring the provision of sexual and reproductive health care.

In the last decade, UNFPA helped the Ministry of Culture, Sports and Tourism and the Ministry of Labour, Invalids and Social Affairs to conduct the 10-year reviews of the Domestic Violence Prevention and Control Law and the Gender Equality Law.

UNFPA considers that it is essential to get the enabling environment (legislations and policies) set in gender equality promotion, she noted.

Kitahara said UNFPA also helps Viet Nam generate evidence and analyse data for gender equality, citing the fund’s support in the conduct of the 2nd National Study on Violence against Women and the Population and Housing Census in 2019, which was very innovative with the use of most advanced ICT technology.

UNFPA promotes innovative communication, particularly within the context of the government’s prioritisation on digital transformation. This is particularly useful in working with Viet Nam’s young generations, who are creative and inspirational in using modern technologies to express themselves, promote gender equality, and embrace diversity.

“We also tap into innovative communication to encourage the participation of men and boys,” she said. “Vietn Nam’s media outlets are also moving towards the use of digital technologies in transmitting gender messages effectively.”

UNFPA increasingly partners with the private sectors, including buses and taxis, as well as with mobile phone companies to disseminate gender messages such as to stop violence against women and emphasise “Girls Deserve to Shine.”

At the same time, UNFPA ensures service provisions to help women and girls. In 2020, the very first one-stop crisis center “Anh Duong House” was launched in the northern province of Quang Ninh, providing comprehensive and essential services, including medical care, counselling, police protection, social welfare and justice services, which is a significant shift from a shelter. This model has been replicated in central Thanh Hoa province in early 2022, and in the next five years, six more centres are expected to be formed in the country.

Kitahara affirmed that UNFPA will continue to work towards a Viet Nam, where the potential of women and girls is fully explored and fulfilled, because “Girls Deserve to Shine”.

Many projects and programmes tailored to promote gender equality in all sectors...