Modern fairy tales and bedtime stories will help change the way societies think of women’s and girls’ roles in public.

UN Women recently published the Exploring the modern fairy world together with you - Guide to reading the book series “Generation Equality – Fairy Tales on Gender Equality" for teachers, parents, and educators. In a study entitled “Gender in 20th Century Children's Books”, which was built upon nearly 6,000 children's books published between 1900 and 2000 in the US, Janice McCabe, Assistant Professor of Sociology at Florida State University et al. found that males are central characters in 57% of children's books published each year. Meanwhile, only 31% have female central characters.

This study also found that 25% of books did not contain female characters, though male characters appeared in up to 100% of the books. Even in the few books containing female characters, women represent almost no voice or do not speak up. They have no dreams or aspirations. They just sit there waiting for a prince.

This is also the typical pattern of the fairy tales that we still read to children. The stereotypes in common fairy tales depict female characters as beautiful, weak, dependent, and focused on tasks such as cleaning, cooking, and taking care of the family. Meanwhile, male characters are often described as having strong, proactive courageous, and commanding personalities.

This handbook is intended as a guide to reading books, fairy tales in general, and the book series "Generation Equality - Fairy Tales on Gender Equality" in particular.

Each tale in the book set honestly presents gender stereotypes and actions to be taken in an attempt to change gender stereotypes in society. The goal is to equip young readers with a solid foundation of perceptions. This, in turn, will enable them to confidently create a society of gender equality, free of barriers and social norms that impede women, men, boys, girls and other genders from enjoying and realizing their full potential. 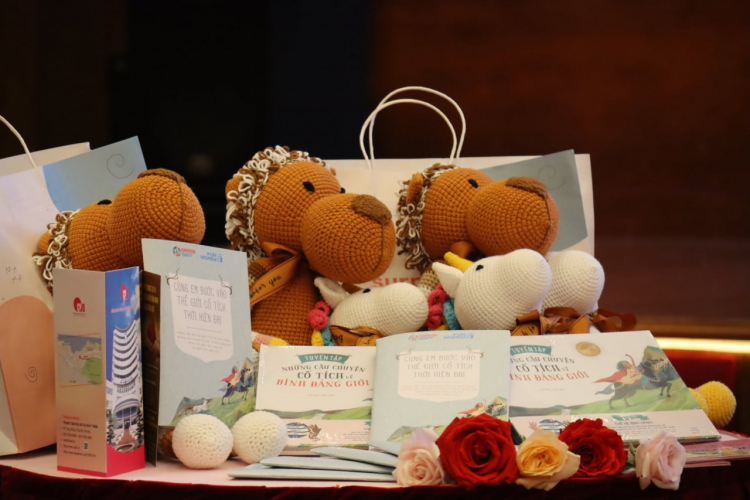 The stories are the winners of the contest titled Generation Equality: Vietnamese people create modern fairy tales, organized by UN Women, ChildFund Vietnam and the Embassy of Ireland in 2019. The contest aimed to eliminate harmful gender stereotypes and gender norms existing in fairy tales that hinder the comprehensive development of children.

The organizers hope that every parent, teacher, and educator - through reading time at home, reading lessons at school, or reading activities in the community - will continue to inspire, as well as spread the message of humanity and progress of the book series to a wider range of children across Vietnam.

In addition, Crabit Kidbooks also donated 20% of the profits from selling 1.900 books in the collection "Generation Equality - Modern fairy tales" within the past year to the representative of Peace House Shelter, where is home to women and children who are victims of gender-based violence.

On Nov. 26, UN Women, in collaboration with the Center for Development Women, Vietnam Women's Union Central Committee and with the support of Share, Crabit Kidbooks, The Olympia Schools, Chippi and Co. Vietnam, Vietnam Youth Music Institute, Vietnam National Symphony Orchestra, organized the Educational Concert: Generation Equality - "You can create your own Peace Journey", which is an unique combination of modern fairy tales and music. The concert aims to challenge gender norms through gender equality fairy tales to children, teachers and parents.

Throughout the program, viewers were immersed in the vivid fairy world with the intelligent and brave princess Ho Sao, who strives to pursue her dreams without being bound by gender norms. “A princess with curly hair” is one of the winning stories in the book series “Generation Equality – Modern Fairy Tales” from a contest organized by UN Women, ChildFund and the Embassy of Ireland in 2019.