The Vietnamese capital city will ensure sufficient supply of essential goods for locals amid the implementation of more stringent social distancing measures, according to the municipal Department of Industry and Trade. 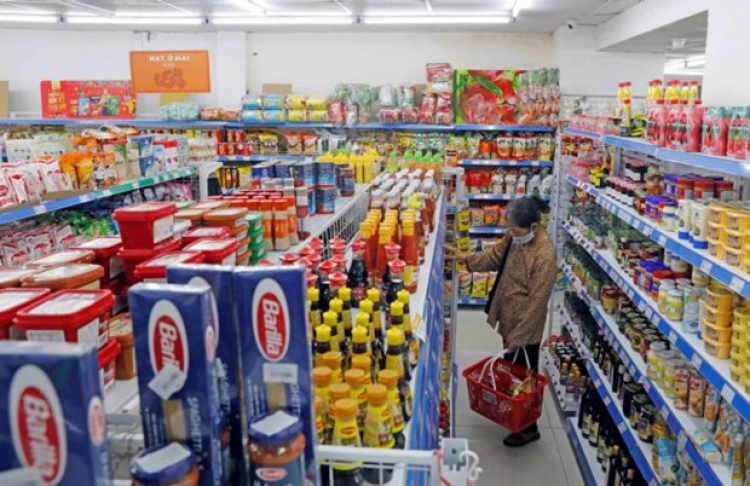 A woman shops for essentials at a supermarket in Hanoi. (Photo: VNA)

The Vietnamese capital city will ensure sufficient supply of essential goods for locals amid the implementation of more stringent social distancing measures, according to the municipal Department of Industry and Trade.

The announcement came after local residents flocked to supermarkets and stores late last week to buy groceries and essential items ahead of beefed-up social distancing measures introduced across the city.

Addressing a meeting in Hanoi on July 19, Tran Thi Phuong Lan, Acting Director of the department, said the city’s industry and trade sector had worked out five scenarios for preparing goods supply since the start of the pandemic in 2020.

The department calculated the monthly need among locals of 17 essential items, with a total estimated value of 21 trillion VND (over 900 million USD), and since the beginning of this year has suggested businesses triple their supply volume of essentials to about 194 trillion VND, Lan said.

Amid the complex development of the virus over the past seven months, goods supplies in the city have remained sufficient with no sudden increase in prices recorded, as businesses have been well prepared to meet customers' demand for essential goods. There have also been an adequate number of employees for goods delivery and online sales.

In his speech at the meeting, Vice Chairman of the city People's Committee Nguyen Manh Quyen emphasised the importance of reviewing and listing all markets, trade centres, convenience stores and price-stabilisation points to effectively distribute goods if needed while securing supply chains in the north and diversifying supply areas to better meet local needs.

Quyen also proposed that the city's transport sector help businesses bring goods from supply areas in other provinces to stores throughout the city.

Hanoi is home to many stores, including 459 traditional markets, 123 supermarkets, 1,800 convenience stores and tens of thousands of grocery stores.

In case of an exponential surge in demand, another 2,000 stores will be set up across the city, the department said, adding that it would also launch 236 mobile stores in trucks to deliver goods in districts and towns.

Accordingly, it has advised people against stockpiling goods and gathering at supermarkets and stores.

Hanoi-based BRG Retail said that it had built a plan on stocking and supplying essential goods at stable prices for its 77 branded supermarkets and convenience stores in northern provinces and cities, including Hanoi, Hai Phong, Hung Yen, Hai Duong and Quang Ninh, as well as the two southern localities of HCM City and Ba Ria-Vung Tau.

The company said on its website that it had worked with suppliers to increase the stock of essentials by 300 per cent at each store and by ten times at its central warehouse.

Khuc Tien Ha, Northern Region Director of VinMart supermarket chain, said the retailer would ensure sufficient supplies of goods to the capital. It has also worked with major suppliers to increase the volume of stock by three times to ensure adequate essentials on the shelves at all points of sale./.