A programme to provide livelihoods, free medical check-ups and medicines for victims of landmines and unexploded ordnances (UXOs) has been jointly organised by the Vietnam Association for Supporting UXO/Mine Action Efforts (VNASMA), its chapter in Quang Ngai, the Peace Foundation and the Ho Chi Minh City University of Medicine and Pharmacy. 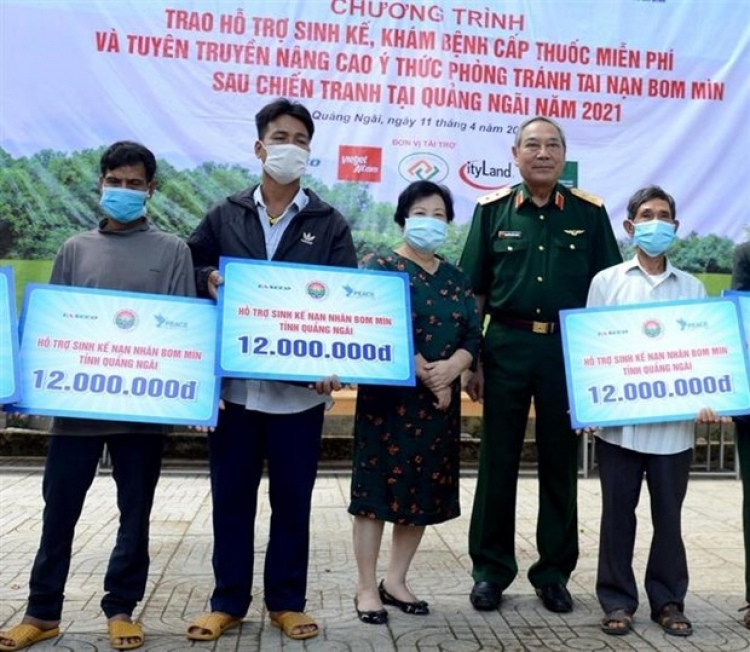 A programme to provide livelihoods, free medical check-ups and medicines for victims of landmines and unexploded ordnances (UXOs) left from the war was held in the central province of Quang Ngai on April 11.

The programme on April 11 aimed to raise public awareness of preventing post-war bomb and mine accidents in Quang Ngai, VNA reported.

At the event, about 500 people who are victims of Agent Orange (AO)/dioxin and landmines and UXO accidents, and poor patients in Nghia Hanh and Ba To districts were given free medical check-ups and medicines.

Twenty poor households in the districts were also presented with cows worth VND 12 million (around USD 521) each, while 20 other families with difficult circumstances were provided with VND 15 million (USD 651) each to help them repair their houses.

Meanwhile, 40 bicycles, worth VND 2 million (USD 86) each, were given to needy students who show good performance in their study.

VNASMA Chairman Nguyen Duc Soat said after seven years of operation, the association has supported many victims of landmine/UXO accidents, helping them escape from poverty and improve their incomes.

According to Vietnam National Mine Action Center (VNMAC), there are about 800,000 tonnes of UXO left from wartime nationwide, with nearly 6.1 million ha of land contaminated or suspected to be contaminated, accounting for 18.71 percent of Vietnam’s total area.

The US army sprayed some 80 million litres of toxic chemicals, 61 percent of which was Agent Orange and contained 366 kilos of dioxin, over nearly a quarter of southern Vietnam’s total area from 1961 to 1971, VNA reported.

Figures show that 4.8 million Vietnamese people were exposed to AO/dioxin and about 3 million people became victims. Tens of thousands have died while millions of others have suffered from cancer and other incurable diseases as a consequence of exposure. Many of their offspring suffered birth deformities.

Quang Ngai is one of the localities that are heavily suffering post-war bomb and mine pollution. Statistics show that the province has over 20 percent of natural land contaminated with over 17,500 tonnes of post-war bombs, mines and UXOs left in the ground, lakes, and coastal areas.

Since 1975, Quang Ngai has recorded nearly 2,300 victims of post-war landmine and UXO accidents, including nearly 1,600 injured people. Most of the victims become a burden to their families, so they really need assistance to overcome difficulties./.

As prices surge, labourers are not only hoping for a pay rise but also an increase...

Campaign launched in HCM city in respond to Action Month...

The campaign aims to review HIV & AIDS prevention activities over the past 30 years...