Huoi Hoc hamlet in Muong Nhe district of Dien Bien province was built under project 79, a population stabilization project to ensure national defense and security approved by the Prime Minister in 2012. Party and State support and local effort have transformed the lives of the Mong people in Huoi Hoc hamlet.

Huoi Hoc is a resettlement village for Mong ethnic minority people, who have escaped poverty and fundamentally improved their lives.

“The programs have greatly improved local living conditions and created a means of subsistence for ethnic people. Muong Nhe is one of the 62 poorest districts in Vietnam, with an 80% poverty rate in the recent past. That figure has now dropped to 60%. Some hamlets have a poverty rate of 38%,” Hung added.

"During the past term, we admitted nearly 700 new Party members, 500 of whom are ethnic people. We have made sure all 38 hamlets have Party members and have established 75 grassroots Party cells. We are providing training and awareness improvement for leading villagers. 26 village patriarchs have been admitted to the Party. 12 of them have assumed the dual role of village chief and Party cell secretary,” the Secretary of Muong Nhe Party Committee, said.

“Outstanding individuals and role models are recognized each year. They are the nucleus in spreading the Party and State's directions, policies, and laws, especially in poverty reduction. They are also the nucleus in resolving community conflicts,” Hung noted.

Last October Dien Bien promulgated a plan to finance the construction of houses for poor families in Muong Nhe. The selected housing models are suited to the local climate and terrain, and the habits and customs of ethnic people in Vietnam’s northern mountains.

Major Van Van Hung, head of the  district’s Public Security, said, “Under project 79 Huoi Hoc hamlet has 32 households. Since 2017 the public security force has built or repaired houses for all villagers.”

According to Hung, 19 of 32 households have been financed to construct houses worth about 2,200 USD each. Financial support has gone to those most in need. The public security force has helped build roads and electricity and water works. 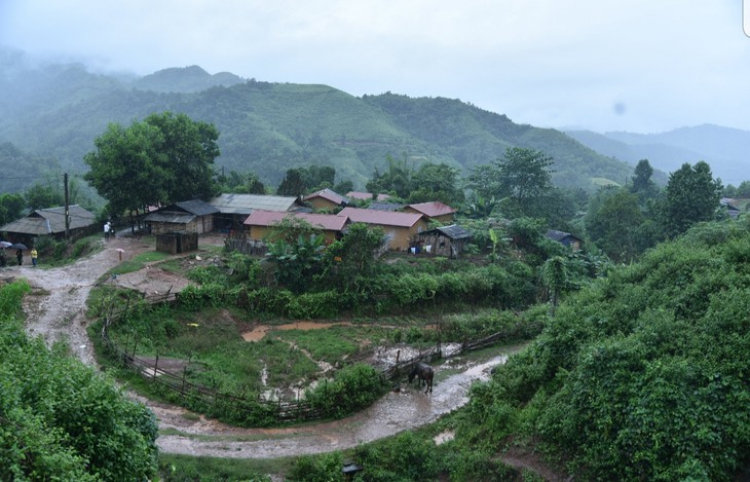 Huoi Hoc villagers subsist on agriculture and forestry, tilling fields on the mountain slopes, breeding animals, and growing vegetables, and rubber and fruit trees. They have been taught how to do intensive farming and build terraced fields.

Vu A Tu, a villager, said, “In 2017 as soon as I learned about the project to plant rubber trees, I decided to move from Son La first to Nam Po hamlet and then to Huoi Hoc hamlet. There are seven in my family.”

“The State has provided seedlings and breed animals and the public security forces have helped to build houses for everyone in the hamlet. I now work for a rubber company and earn more than 170 USD a month. We have 2 ha of land to grow rice. Due to the swine flu epidemic, we are raising poultry instead of pigs. We have planted a few fruit trees around the house. Previously we didn’t have land for cultivation, now our life has become much easier. We have no need to move to another place,” said Vu A Tu.