Most Vietnamese citizens in Ukraine evacuated from conflict zone: spokesperson

Foreign Ministry spokesperson Le Thi Thu Hang made the remarks at a regular press briefing held virtually on March 3 regarding the citizen protection work for Vietnamese communities in Ukraine. 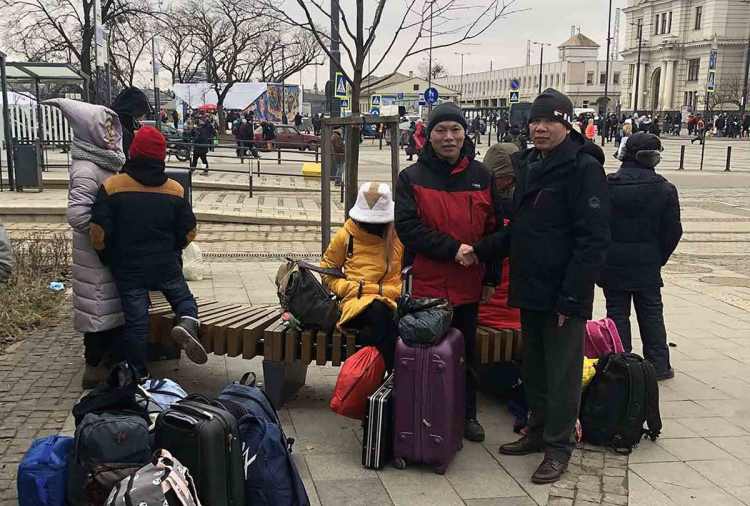 Vietnamese citizens get support from the embassy staff. (Source: Vietnamese Embassy in Ukraine)

In accordance with Government’s official dispatch dated February 26 on protecting Vietnamese citizens and legal entities and issues of concern in the current situation in Ukraine, Vietnamese ministries, sectors and diplomatic missions in Ukraine and neighbouring countries of Poland, Russia, Romania, Hungary and Slovakia have closely worked together to carry out citizen protection measures, ensuring security and safety, as well as necessary conditions to evacuate Vietnamese citizens from the conflict zone and help them return to Viet Nam if they want to, Hang said.

Vietnamese representative offices in those countries have operated citizen protection hotlines round the clock to update Vietnamese travelling from Ukraine on safe travel routes and worked with organisations to receive and support the displaced.

According to the spokesperson, as of noon of March 3, most Vietnamese people in Kiev, Odessa and Kharkov have been evacuated from the conflict zone and helped to move to neighbouring countries, Hang said. More than 400 people have arrived in Moldova and now are on their way to Romania; 600 reached Poland; 70 to Romania; 33 people to Slovakia and 50 to Hungary.

Vietnamese diplomatic missions are providing those evacuated people with necessary procedures and documents; working with local authorities and local Vietnamese associations to pick them up, arrange temporary for them and provide them with necessities.

Viet Nam's Ministry of Foreign Affairs and representative offices have coordinated with relevant ministries and airlines to submit to the Prime Minister the plan to evacuate Vietnamese citizens.

“This is a very important task and the utmost priority of the Ministry of Foreign Affairs and relevant ministries and sectors to promptly arrange flights in tandem with the Government’s guidelines and in a humanitarian, swift and safe approach.

All specific information on such flights will be informed to the citizens in a timely, open and transparent manner”, the spokesperson said.