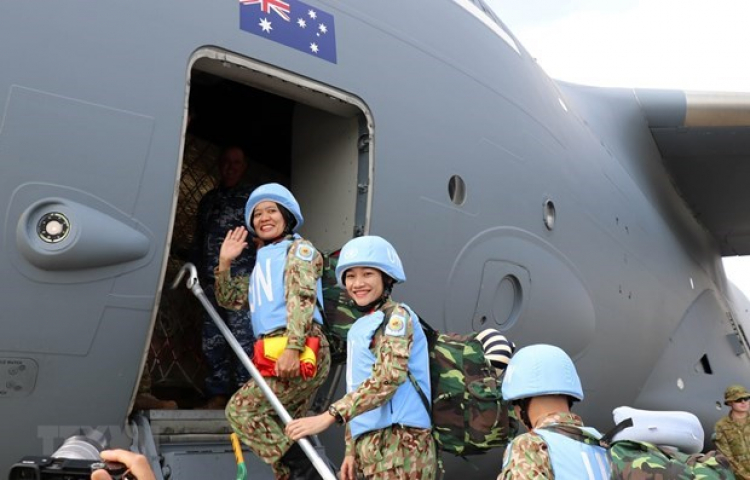 According to VNA, all 455 lawmakers present at the 14th National Assembly’s 10th session in Hanoi on November 13 voted in favour of a resolution on Vietnam's engagement in the United Nations peacekeeping operations.

One principle set up in the resolution is that engagement in UN peacekeeping missions must be placed under the Party’s absolute and direct leadership in every aspect, decided on by the National Defence and Security Council, commanded by the State President, and managed by the Government, while complying with the Constitution and laws of Vietnam, the UN Charter, international law, and international treaties to which the country is a party.

Other principles include ensuring independence, self-reliance, peace, friendship, cooperation, and development; matching the interests of the country and people as well as its conditions and capability; respecting the sovereignty and territorial integrity of countries; limiting activities to those that assist the settlement of the consequences of war and maintaining post-conflict peace for humanitarian purposes, at the request of the UN; and only sending personnel to states and regions with UN missions and to UN agencies. The resolution also stipulates that individuals and units involved in UN peacekeeping missions must protect Vietnam’s stature and prestige; bring into play its historical and cultural values and images of the country and its people; respect the law, administration, people, culture, and customs of host countries and regions; and perform other duties assigned by competent authorities in Vietnam.

Under the resolution, the Ministry of National Defence is in charge of chairing and coordinating with the Ministry of Public Security and other relevant ministries and sectors to make medium- and long-term plans on building Vietnamese forces for UN peacekeeping activities and to submit them to the Prime Minister for a decision.

The resolution is scheduled to come into force on July 1, 2021.