As Vietnamese people turn their heads to Hung Kings’ Temple to pay tribute to the Nation-Founding heroes, overseas Vietnamese communities across the globe also gather to commemorate the occasion. The Vietnamese community in Russia on April 21 (March 10 in lunar calendar) held the Global Hung Kings' Commemoration Day with the virtual attendance of overseas Vietnamese from different countries.

Speaking at the altar, Mr. Le Dinh Vu, President of the Vietnamese Association in Saint Petersburg, expressed his respect and gratitude for Vietnamese descendants to their ancestors, the nation’s heroic resistance to colonies during wartime, and its deep-rooted compassionate tradition.

On behalf of all overseas Vietnamese, Mr. Tran Phu Thuan, Vice Chairman of the Vietnamese Association in Russia vowed to do his utmost to make Vietnam a greater and more beautiful nation. He added that Hung King’s Commemoration Day was a significant and meaningful event and was an opportunity for Vietnamese nationals worldwide to turn their heads to their homeland.

Thuan then lay all the offerings from units, organizations, and individuals onto the altar. Meanwhile, Vietnamese nationals in Udon Thani, northeastern Thailand also solemnly held the ceremony at Khanh An Pagoda – the only Vietnamese temple in Udon Thani province. In 2019, Vietnamese Thai celebrated Hung King’s Commemoration Day for the first time in the pagoda. A statue of Hung King is also placed in there.

Speaking at the ceremony, Consul General Hoang Ngoc Son said the ancestor worshipping belief was a cultural beauty of Vietnamese tradition and Hung King’s death anniversary in particular. He expressed his happiness to be able to join other overseas Vietnamese to offer incense to the Nation-Founding Kings and other ancestors. He also spoke highly of Vietnamese community in Udon Thani for holding such a successful ceremony during Covid-19 pandemic time.

Ambassador Tran Viet Thai, all staff at the embassy along with Vietnamese representative agencies in Malaysia offered incense and flowers to pay tribute to the ancestors.

In particular, in this year's ceremony, Ambassador Tran Viet Thai brought some sacred land and water from Hung Kings Temple in Phu Tho, Vietnam to Malaysia. Earlier, speaking to the Vietnamese community, Ambassador Tran Viet Thai highlighted the significances of Hung Kings’ death anniversary, stressing that the ceremony brings together the spirit and values of Vietnamese people over thousands of years of building and defending the country.

Over the past years, Vietnamese ex-pats in Malaysia have always turned their hearts to Vietnam. The ceremony serves as an occasion for overseas Vietnamese to express their gratitude to Hung Kings as well as help to foster solidarity and remind the young generations of their homeland. 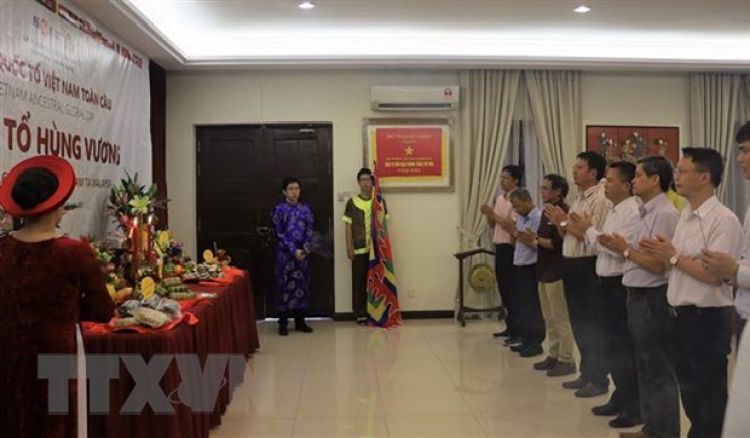 Ambassador Tran Viet Thai, all staff at the embassy along with Vietnamese​ representative agencies in Malaysia offered incense and flowers to pay tribute to the ancestors. Photo: VNA

On April 17, the Vietnamese Embassy in Canada also held a virtual ceremony to commemorate Hung Kings for Vietnamese people living across Canada.

Due to the pandemic, the worship ceremony was held online and synchronously held in Ottawa, Vancouver, Toronto, Montreal, and Saskatchewan, VNA reported.

After offered incense in commemoration of Hung Kings at Vietnam House in the Canadian capital Ottawa, Vietnamese Ambassador to Canada Pham Cao Phong then highlighted the origin and significance of Hung Kings worship.

The Vietnamese community in Canada expressed their wish that Vietnamese culture will spread more broadly so that the world will know Vietnam as not only the resilient people in the struggles for national liberation but also the people of intelligence, kindness, and solidarity. Hung King Temple Festival is a traditional festival that honors the first King of Vietnam - Hung King. It's an occasion for every Vietnamese to remember their origin and express their respect as well as gratitude to the ancestors of the Vietnamese people. Therefore, it's considered a national festival of Vietnam.

The Hung King Temple Festival is one of the most important and sacred festivals of the Vietnamese people, deeply embedded in the minds of every Vietnamese citizen, regardless of where they originated from.

According to statistics, over 2,000 children lose their lives in drowning accidents...