A photo exhibition on six decades of the Agent Orange (AO)/dioxin disaster in Vietnam took place in the northern port city of Hai Phong on July 27. 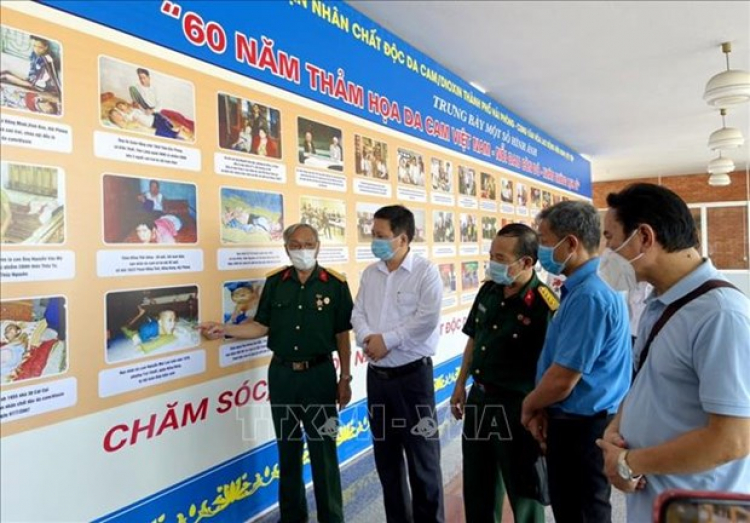 At the exhibition (Photo: VNA)

A photo exhibition on six decades of the Agent Orange (AO)/dioxin disaster in Vietnam took place in the northern port city of Hai Phong on July 27.

The event featured 60 photos following the themes of AO/dioxin pains; a concerted effort in support of and care for the victims; the building of the city’s association for AO/dioxin victims; and related people-to-people activities and the struggle for justice for the victims.

Nguyen Huu Y, head of the municipal association for AO/dioxin victims, said the exhibition aims to spread a message that surmounting AO/dioxin consequences is the responsibility of entire society and that the victims are in dire need of care and attention from the community.

As a result, around 4.8 million Vietnamese were exposed to the toxic chemical. Many of the victims have died, while millions of their descendants are living with deformities and diseases as a direct result of the chemical’s effects.

Hai Phong has a total of 17,047 people infected and suspected of being exposed to the toxic chemical, of whom more than 10,000 are the direct victims, and over 6,000 are biological children and grandchildren of those who fought in the resistance war.

More than 1,000 victims have died. As many as 6,462 victims, who are receiving monthly allowances, are residing in Hai Phong.

In recent years, the city annually spent over 40 billion VND (1.74 million USD) on offering gifts to war veterans exposed to the toxic chemical on two occasion of the Lunar New Year holiday and War Invalids and Martyrs Day (July 27)./.

Remove barriers for accessing to social services by women...

The UN Entity for Gender Equality and the Empowerment of Women (UN Women) and the...