On October 11 - 12, the Department of Labor, Invalids and Social Affairs of Quang Ninh province in coordination with the Provincial Youth Union organized the Provincial Children's Forum 2020 themed "Joining hands to prevent and combat child abuse". 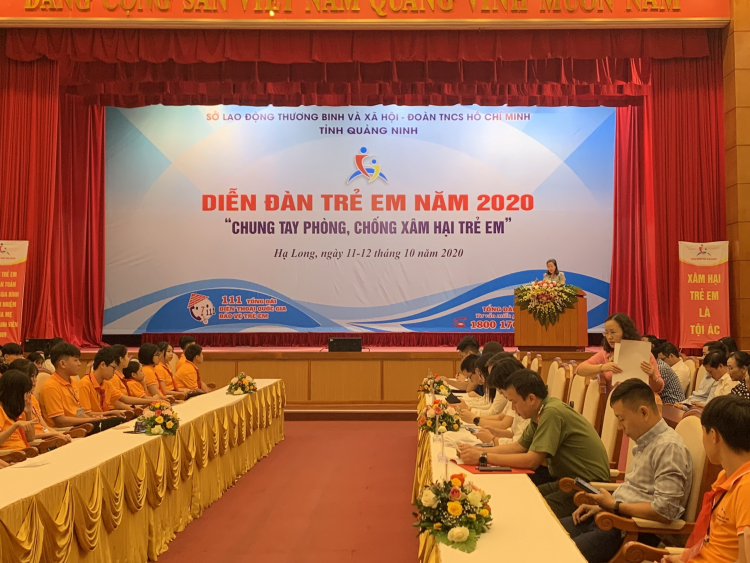 The event was also an opportunity for children to engage in dialogue with delegates on child abuse prevention. Source: Quang Ninh newspaper

According to the Department of Children, in 2019 and the first 6 months of 2020, there were 3,035 cases of child violence and abuse were reported nationwide, involving 3.176 child victims. Of the victims, 2,597 were sexually abused, accounting for over 80% of the total cases. In Quang Ninh, there were 55 cases of child abuse, of which 24 were sexually abused... These incidents caused anxiety and insecurity for children, families, communities, causing frustration for society and is a wake-up call in child protection, especially in child abuse prevention.

At the forum, many children boldly raised questions for representatives of departments and agencies to answer. Through that, they expressed the legitimate aspirations and desires to live in a safe, healthy and friendly environment.

The delegates focused on the issues that children were interested in, answered their concerns and questions and raised specific actions, future directions of departments and localities to prevent and combat child abuse, and build a safe and healthy environment for children.

The Forum Organizing Committee will synthesize to send children's recommendations to provincial leaders of departments, related agencies and units. Since 2019, the Vietnam’s National Assembly has officially supervised the ministries, sectors and localities' implementation of policies and laws on child abuse prevention.

On June 19, the National Assembly adopted Resolution No. 121/2020 / QH14  to further improve the effectiveness and efficiency of policies and laws on prevention and control of child abuse.

The Prime Minister also issued a plan to implement and implement the National Assembly's Resolution No. 121/2020 / QH14 dated June 19, 2020 on continuing to strengthen the effectiveness and efficiency of the implementation of policies and laws. on the prevention and fight against child abuse.

The plan sets out 6 tasks and solutions, including: 1- Reviewing, promptly amending, supplementing, issuing new ones according to its competence or submitting to competent agencies to issue policies and laws related to children. children, meeting practical requirements, in accordance with international treaties to which Vietnam is a member; 2. Improving the effectiveness of the propaganda and dissemination of the Children Law, knowledge and skills to prevent and combat child abuse; 3- Improving efficiency of the work of interdisciplinary inspection and control on the prevention and control of child abuse; 4. Stepping up the performance of tasks related to child protection, prevention and combat against child abuse; 5. Ensuring appropriate resources for the work of child protection, child abuse prevention and combat; 6. People's Committees of provinces and cities directly under the Central Government to implement and direct People's Committees at all levels to implement.

The Health Ministry called residents for limiting to gather at public spaces during...

In order to create a friendly, sharing and connecting environment for returned migrant...

Some 60 delegates representing the police, courts, procuracies of the Women's Union,...

As prices surge, labourers are not only hoping for a pay rise but also an increase...