The Internet and social networks on the one hand benefit users, but also have downsides, including human rights issues. These issues require regulatory frameworks and policies to promote the positives and limit the downside in cyberspace. 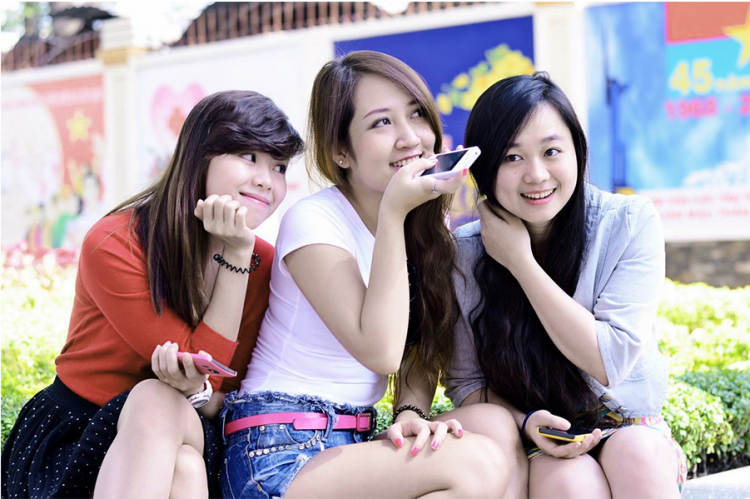 In Vietnam, coffee shops, even sidewalk iced tea shops have free wifi. Free wifi is not only available at tourist destinations but also places such as hospitals and schools. Source: Internet

The Vietnamese Government’s consistent view is not to prohibit the development of the Internet, but the 'reverse side' caused by the Internet, which is contrary to cultural identity, national customs and traditions, and hinders social development.

According to the Vietnam Digital Advertising 2019 report released by Adsota, last year Vietnamese spent about 6 hours and 42 minutes every day per person accessing the Internet on all devices. Specifically, they spent 2 hours and 33 minutes on social media, higher than the world average of 2 hours and 16 minutes.

The use of technology and the internet cannot be ignored to realise other goals and targets like gender equality, digital inclusion and quality education.

Freedom of expression and information is regarded as a foundational human right which enables other rights and freedoms. Internet access can be argued as being the foundation of foundational rights. Like human rights, the concept of the internet is universal and frontier-less. Access to the internet must not be limited to a particular area, class, gender, race or community, but to the entire human race. Any curtailment of internet access, filtering and blocking of contents, or shutting down of websites often draws criticism from a wide section. The very universal character of the internet is worth reiterating to highlight its status as a human right.

However, the Internet and social networks on the one hand benefit users, but also have downsides, including human rights issues. These issues require regulatory frameworks and policies to promote the positives and limit the downside in cyberspace.

Children are the most vulnerable in the online environment. According to Lesley Miller, Deputy Representative of UNICEF Vietnam, besides the opportunities, the Internet and IT also pose many challenges. Networking platforms revolutionize the lives of children, but at the same time bring about the most horrible abuse and exploitation of children.

Vietnam has one of the highest growth rates of internet users in the world. Over two decades since connecting to the global internet, the strong development of information technology, telecommunications and the internet is creating a new opportunity for Vietnam to quickly catch up and take advantage of advanced scientific and technological achievements.

It also helps accelerate the process of industrialisation and modernisation of the country, and deeper integration into the world economy.

According to the department's data, as of January 2019, Vietnam had 64 million internet users, accounting for more than 66 per cent of the country's population, ranking 13th in the world. Of the figure, one third are at the age of 15 to 24.

Also, the latest report of the Ministry of Information and Communications showed, Vietnam currently has 126.95 million mobile phone subscribers, including 65.33 million mobile broadband subscribers (those who use 3G and 4G services). The number of mobile subscribers is increasing very rapidly in Vietnam, the report said. Vietnam also has 15.71 million fixed broadband Internet subscribers and this number is also rising rapidly.

Like many countries, Vietnam has been facing threats and challenges from cyberspace, directly threatening national security and social order and safety.

A representative of the Ministry of Public Security’s Department of Cyber Security and High-tech Crime Prevention (A05) said that the number of criminal cases that this agency receives annually is about 1,000, of which the number of cases of crimes against children in cyberspace is increasing. The crime trend is also moving gradually to cyberspace.

The social network environment is now considered fertile ground for fake news. Recently, fake information about popular actor Tran Thanh using drugs spread quickly on Facebook. Thanh found the fake news spreader and decided to sue the person. The actor said that he suffered mental damage, and lost some advertising contracts because of the rumor. Tran Thanh is not the first famous person in Vietnam who has suffered from fake news.

The Ministry of Public Security said that taking advantage of the COVID-19 pandemic, hostile forces and politically dissatisfied subjects at home and abroad have spread false information in cyberspace to distort the epidemic situation and the Vietnamese government’s efforts to fight the pandemic. Many people released false or inaccurate, unverified information to attract views, causing social confusion.

On social networks, hostile and reactionary forces have created a lot of groups and forums as well as fake and malicious information in order to propagate, distort, incite, and disturb information, and cause confusion in public opinion, creating instability in security and order to destroy the Party and State. Some took the name of "freedom of expression" to express their personal views, but actually for the purpose of creating internal instability, divisions. If these cases are handled, the hostile forces will use the guise of "Vietnam violates the right to freedom of expression", "Vietnam violates Internet freedom" ...

Vietnam has implemented synchronous solutions to ensure network security, to prevent, fight and handle Internet users who abuse the Internet to violate the rights and interests of the state and citizens. This is not only consistent with international laws and the laws of other countries in this field, but also contributes to promoting the development of the Internet and the digital economy in Vietnam and protect the rights of people and society.

According to a report by the Ministry of Information and Communications, for the management of electronic information, the ministry in 2019 negotiated with Facebook and Google to ask these two platforms to cooperate in remove content that violates Vietnamese laws and take measures to prevent the spread of fake news and fake accounts.

The Ministry of Information and Communications also coordinates with relevant ministries and agencies such as the State Bank of Vietnam, the Ministry of Finance, and the Ministry of Public Security to synchronously deploy legal, economic and technical measures to request Facebook and Google to strictly comply with the laws of Vietnam. Each Vietnamese to have a smartphone and broandband connection. Source: Internet

Deputy Minister of Public Security Luong Tam Quang affirmed Vietnam’s commitment to actively and responsively taking part in ASEAN co-operative mechanisms on cybersecurity at a teleconference of ASEAN ministers on cybersecurity on October 10.

Vietnam recognises the need and importance of building responsible codes of conduct online to maintain healthy, safe cyberspace and ensure information security amid the huge changes of digital transformation, he said.

The Vietnamese Government has assigned the Ministry of Public Security to finalise a legal framework on cybersecurity consistent with regional and international standards to facilitate tightening cybersecurity, cybercrime prevention and control in Vietnam as well as international co-operation, he said.

Vietnam has implemented the 'National Digital Transformation Programme towards 2025, with a vision to 2030' with the aim of making the country among 50 leading e-government countries.

The Ministry of Public Security has focused on protecting critical information infrastructures through promoting training, improving qualifications and capacity of the specialised security teams as well as conducting research to develop and apply advanced software and technology.

The ministry has also paid attention to international co-operation with countries inside and outside the region to respond to attacks on information infrastructures, he said.

Vietnam has enacted laws to ensure people’s right to access information: the 2016 Press Law, the 2016 Law on Information Access, the 2018 Cyber Security Law, and the Decree on Management, Supply, and Use of Internet Services and Online Information.

These legal documents comply with the principle of law-governed socialism and the 2013 Constitution of ensuring the right to information access and freedom in cyberspace.

The 2016 Press Law stipulates the right to freedom of speech and press, allowing people to voice their opinion about domestic and international issues, comment on the building and implementation of Party guidelines and State policies and laws, and contribute opinions, and report on the Party, the State, and political and social organizations.

The 2016 Law on Information Access stipulates that citizens have the right to access prompt and accurate information and are allowed to voice their opinion, file a lawsuit, and report on violations of the law.

The 2018 Cyber Security Law stipulates that the Vietnamese State will respect and ensure human rights, including the right to information access. The Decree on Management, Supply, and Use of Internet Services and Online Information requires the Party and State to pursue a consistent policy of creating conditions for economic growth by enabling people in disadvantaged areas to access internet services and online information.

While the development of mass media and the internet has improved the exercise of free speech and access to information in the nation, as in other countries, Vietnamese law restricts freedom of speech and access to information in certain cases consistent with the International Convention on Political and Civil Rights to protect the legitimate rights of other people, ensure national security, maintain law and order, and safeguard community health and morality.

The Law on Cyber Security has created a solid legal foundation to prevent, combat and handle illegal activities in cyberspace, and to protect the legitimate rights and interests of organizations and individuals. All individuals can still express their opinions on cyberspace, and freedom of expression is completely unrestricted if they comply with the provisions of law. In addition, the law helps create a healthy and safe cyberspace.

Vietnam does not prohibit the development of the Internet, but only prohibits the reverse side caused by the Internet, that is contrary to cultural identity, national traditions and customs, hindering social development, infringing on main political security, social order and safety of the country.

Initiative launched to promote the empowerment of women entrepreneurs

How digital trainings create opportunities for people with...

Despite losing their eyesight, they believe they can take advantage of digital entrepreneurship...

Families with destroyed houses will receive a maximum of VND 40 million (USD 1,730)...