Government is making good on its pledge that “no one will be left behind” as Vietnamese authorities and overseas missions plan to arrange more flights to bring Vietnamese citizens home. 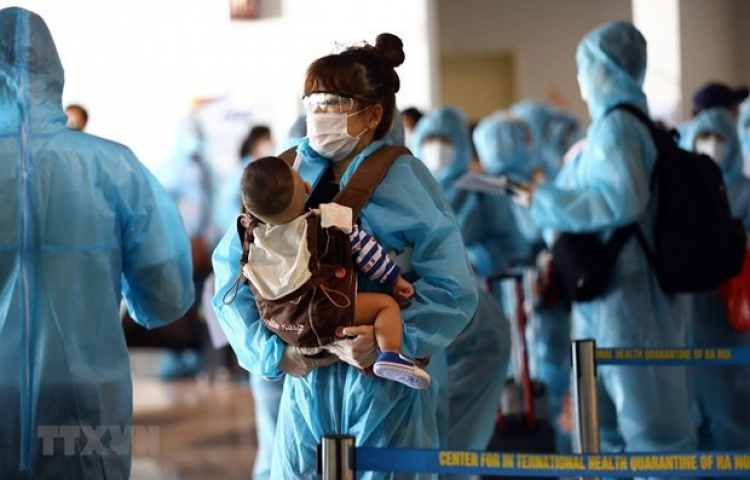 The authorities have made efforts to contain the importation of the disease by implementing a range of regulations regarding COVID-19 prevention and control as Vietnamese authorities and overseas missions plan to arrange more flights to bring Vietnamese citizens home.

The Vietnamese Embassies worked with the host countries' competent agencies to support the citizens in reaching the airports and sent staff to assist them with boarding procedures.

Upon landing at the airports, all crewmembers and passengers were given heath checkups and put into compulsory quarantine in accordance with regulations.

Such intensified disease control measures proved necessary as Vietnam confirmed two more COVID-19 cases, both imported, on October 11, raising the national tally to 1,109, according to the National Steering Committee for COVID-19 Prevention and Control.

One is a 48-year-old Indian expert who arrived in Ho Chi Minh on October 6, while the other is 33-year-old female student returning from the UK on October 3.

Among the total cases, 691 are domestically infected, including 551 linked to Da Nang outbreaks. Vietnam has gone 39 days free of community infections.

Death toll remains at 35. Most of them had underlying illnesses, such as chronic renal failure, blood cancer, heart attack, diabetes (type II), hypertension and multi-organ failure.

There are 15,887 people having close contact with confirmed cases or coming from pandemic-hit regions under quarantine now.

In the future, more flights are set to be conducted to repatriate Vietnamese citizens with disadvantaged circumstances, depending on their need and quarantine capacity at home.

Increase access of HIV information and care for hard-to-reach and high-risk groups...

On September 12, representatives from social and community-based organisations shared...

Ministry proposes keeping COVID-19 in Group A of infectious...

The Ministry of Health has proposed continuing to keep COVID-19 in Group A of infectious...