As one of the three poorest districts in Lao Cai Province, Si Ma Cai has made a change after a period of time actively implementing to alleviate poverty rapidly and sustainably. The local people have raised the awareness of getting out of poverty and increasingly reduced dependence on the State's support policies.

Si Ma Cai is home to ethnic minorities like Hmong, Nung, and Phu La and it used to be one of the three poorest districts of Lao Cai province. Although Si Ma Cai covers a large area, it is mainly craggy mountains and hills. In addition, the drought situation has become more serious; hence, agricultural cultivation faces many difficulties.

Through the Government's Program 30a and the Province’s Resolution No. 22 on sustainable poverty reduction to 2020, along with the motto "turning difficulties into advantages", Si Ma Cai has taken full advantages of the land and workforce, focused on two key forms of production development namely raising cattle in the direction of commodity as well as planting temperate fruit and medicinal trees. Nowadays, Si Ma Cai District have witnessed many changes. Roads to 90 villages are concreted. The electricity is available. Schools, medical stations and communal houses are built. In particular, Si Ma Cai commune, a remote area develops into a beautiful town. The education has successfully universalized.

More notably, the political system has been reduced to 10 communes and is reinforced to meet new requirements in administrative reform. The cadres and party members are qualified and solidary. The border situation is stable.

Some communes such as Man Than, Can Cau, Nan San, Lu Than, etc has made full use of terrains and indigenous experiences to raise cattle. 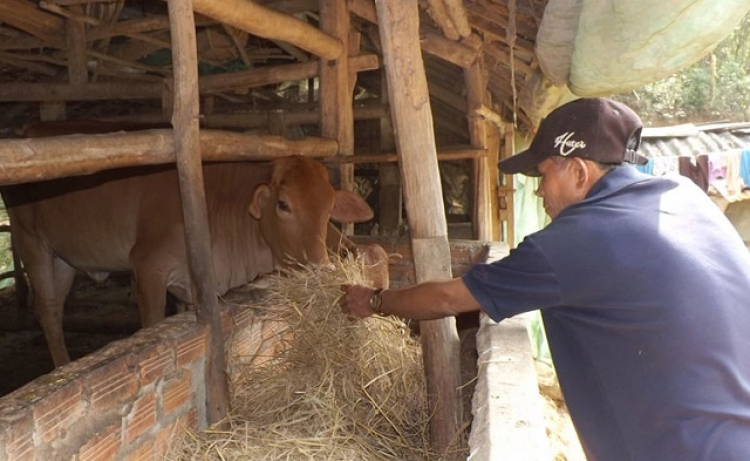 To date, Si Ma Cai district has provided 2,321 cows and buffaloes for 1,136 poor and near-poor households. A number of cattle reaches 21,000 which generates nearly 500 billion VND. The locals have planted 843 hectares of VA-06 grass for livestock.

The highlight of Si Ma Cai is concrete fruit-growing planning. It is conducted by the motto of linking neighboring communes into concentrated areas to facilitate transportation and application of advanced farming practices. The authorities have effectively implemented the “Post-investment interest rate support”. 21 out of 22 targets set by the 17th District Party Congress have been completed. The economic growth rate is maintained at a high level, averaging 10.7% / year. The economic structure has been gradually transformed from agriculture-forestry to industry and service sector. The average income reaches 31.5 million / year (exceeding 157.5% of the target).

The district also strives for 12 percent of average economic growth rate (GRDP), a GRDP per capita / year reaches VND 84 million; economic structure of agriculture and fishery accounts for over 42%; production value per hectare reaches 60 million VND; 4-6 OCOP products is expected to be granted 3-star certification. The forest coverage rate is expected to reach over 41%. Firstly, 10 key projects will be carried out  until 2025.