The Vietnam Farmers’ Union just received 2,800 dignity kits from the United Nations Population Fund (UNFPA) in the handover ceremony held on November 2. These set will be sent to women at risk of Gender-Based Violence (GBV) in Da Nang city.

At least 5.5 million people in the region have been affected, including an estimated 1,343,162 women of reproductive age with 92,075 of them pregnant.

According to the joint rapid assessment carried out last week, in which UNFPA experts played a lead role in the most affected areas of central Việt Nam, health facilities have been hit hard by floods and landslides, and routine public health programmes such as antenatal, delivery, post-natal care and family planning services have been disrupted. Women and girls continue to be unable to access basic health care services, including sexual and reproductive health.

The disaster has forced women and girls to displacement in evacuation centres without having the time to pack essential supplies. As a result, they are unable to manage their hygiene properly and lack access to basic needs such as sanitary pads, clothes and underwear that are needed to manage their menstrual periods. In addition, access to water and places to wash and dry reusable pads and clothes, or to dispose of used materials, is currently challenged.

The UNFPA funding and support includes the distribution of Dignity Kits with essential hygiene items, along with vital maternal health equipment (such as the doppler fetal heart rate detector, which detects the heartbeat of a pregnant woman’s fetus). In addition, UNFPA is supporting the delivery of mobile and outreach sexual and reproductive health services, as part of the wider health sector response to violence against women and girls in flood-affected areas. 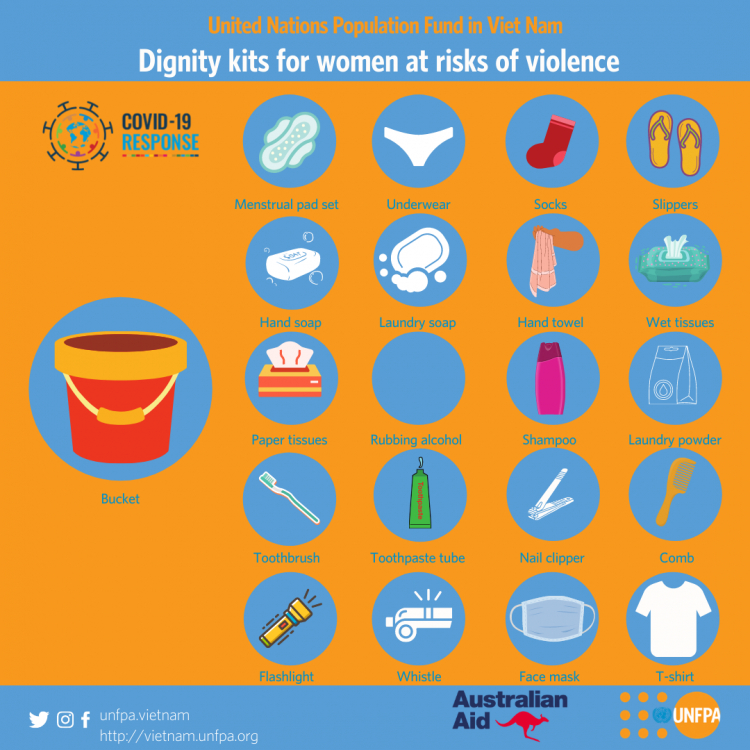 UNFPA on November 2 handed over 2,800 dignity kits to the Vietnam Farmers’ Union to support its female members at risk of violence in the central city of Da Nang.

Earlier, 900 kits were transferred to the Ministry of Labour, Invalids and Social Affairs for delivery to 17 social work centres nationwide, and the Centre for Studies and Applied Sciences in Gender – Family – Women and Adolescents, and Anh Duong House designed for victims of gender-based violence in the northern province of Quang Ninh.

The Dignity Kit is a signature feature of the UNFPA's comprehensive package of humanitarian assistance to safeguard the sexual and reproductive health and rights of women and girls, including gender-based violence risk mitigation and response and protecting the dignity of women and girls adversely affected by a crisis.

Preserving dignity is essential to maintaining self-esteem and confidence, which is important to cope in stressful and potentially overwhelming humanitarian situations. The Dignity Kit comprises the basic items that women and girls need to protect themselves and maintain their basic hygiene, respect, and dignity in the face of crisis.

“UNFPA is calling on the Government and partners to prioritize sexual and reproductive health of women and girls, address high risks of gender-based violence, and respond urgently to their special needs,” said Naomi Kitahara, UNFPA Representative in Vietnam at the handover ceremony.

This activity is under the Government of Australia funded project on “Supporting Interventions to Eliminate Violence against women and Children in Vietnam under COVID-19 Emergency Context”.