The Swiss Party of Labour has expressed its solidarity with Vietnamese-French woman Tran To Nga and all Agent Orange (AO)/dioxin victims of Vietnam after a French court rejected Nga’s lawsuit seeking justice for the victims. 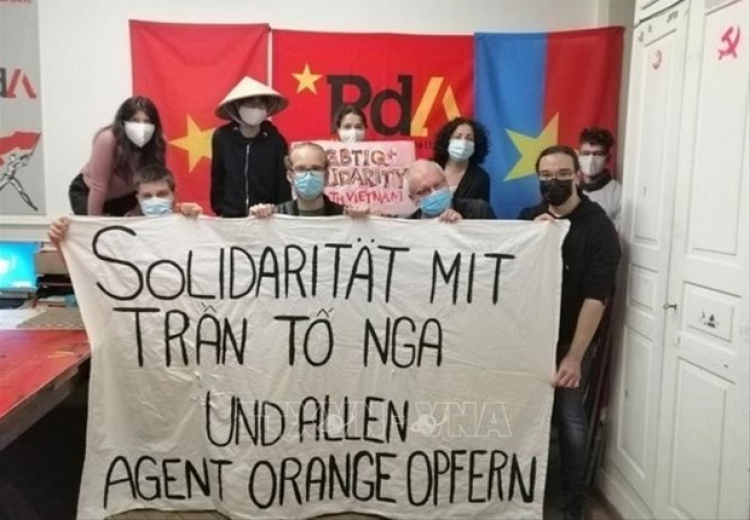 Members of the Swiss Party of Labour show their solidarity with Tran To Nga and AO/dioxin victims (Photo: VNA)

The Swiss Party of Labour has expressed its solidarity with Vietnamese-French woman Tran To Nga and all Agent Orange (AO)/dioxin victims of Vietnam after a French court rejected Nga’s lawsuit seeking justice for the victims.

In a statement released on May 11, the party emphasised that it is unacceptable that after many decades, none of those accountable for the war that destroyed the environment, the ecology, and people in Vietnam have been punished.

Nga’s lawsuit is a great opportunity to regain justice for the victims and help ease part of their war pain, the Swiss party noted, affirming its consistent support for her in this struggle.

As one of the four million AO/dioxin victims, the 79-year-old woman sued 14 multinational chemical companies, including herbicide manufacturer Monsanto (now under the Bayer Group of Germany), for supplying or selling the herbicide and defoliant chemical - AO/dioxin for the US army to use in the war in Vietnam.

However, the Crown Court of Evry city in France on May 10 ruled that it did not have the jurisdiction to hear her case.

In response, Nga said she will appeal, and that she will fight until the bitter end and this is the last struggle of her life.

Nga graduated from a Hanoi university in 1966 and became a war correspondent of the Liberation News Agency. She worked in some of the most heavily AO/dioxin  affected areas in southern Vietnam, such as Cu Chi, Ben Cat, and along the Ho Chi Minh Trail, ultimately experiencing contamination herself.

Of her three children, the first died of heart defects and the second suffers from a blood disease. She has also contracted a number of acute diseases.

She is struggling for justice for not only herself and her children but also the four million Vietnamese people suffering from AO/dioxin./.

Women’s role in trade is increasing as they contribute not only to the growth of...