Ambassador Dang Dinh Quy, Viet Nam’s Permanent Representative to the United Nations (UN), emphasised the important role of humanitarian workers and UN staff in reducing humanitarian burdens and assisting people in the context of prolonged conflict which seriously threatens the life of civilians.

He made the statement at a ministerial meeting of the UN Security Council on the issue of protecting humanitarian workers in armed conflicts held on July 16.

Jean-Yves le Drian, Foreign Minister of France, which holds the presidency of the UN Security Council in July, chaired the meeting. 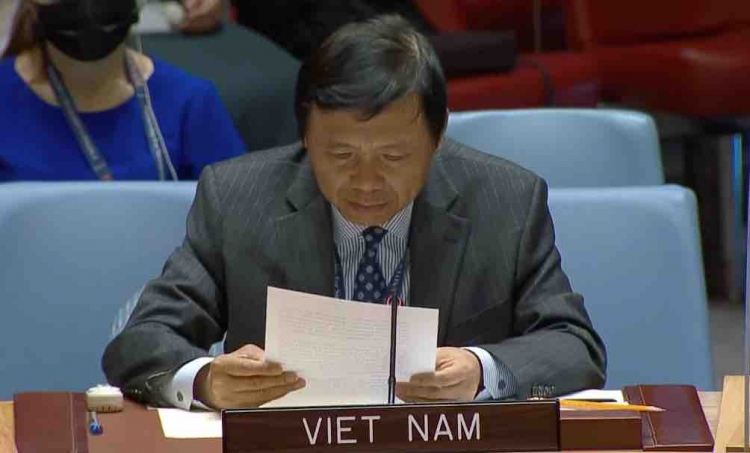 Ambassador Dang Dinh Quy, Viet Nam’s Permanent Representative to the United Nations (UN) made the statement at a ministerial meeting of the UN Security Council.

Ambassador Quy condemned acts of assault and violence against humanitarian and UN personnel, calling on all parties to armed conflicts to comply with their obligations under international humanitarian law to protect civilians and essential infrastructure facilities, as well as keep humanitarian workers safe, and ensure unimpeded humanitarian access.

It is also necessary to uphold the core humanitarian principles of neutrality, impartiality and independence in order to build trust within host communities and among conflict parties, he said, adding similarly, the principles of sovereignty and non-interference, along with domestic law, must be fully respected.

He emphasised that the primary responsibility to protect civilians rests with the state, while calling for efforts to enhance local resilience, reduce the humanitarian need and address the root causes of armed conflicts.

Addressing the meeting, Amina Mohammed, Deputy Secretary-General of the United Nations, said 99 humanitarian workers were killed and many more were attacked, kidnapped, detained, and threatened in 19 countries with conflict last year.

According to the World Health Organisation (WHO), in early 2021, in 14 conflict zones, there were 568 cases of attacks on health facilities and staff.

The UN Deputy Secretary General said that the best way to protect humanitarian workers is to end violence and conflict, and ensure compliance with humanitarian law.

He announced that the Secretary-General of the United Nations has decided to appoint a special adviser on the preservation of humanitarian space and access to strengthen negotiations on these issues.

At the meeting, Robert Mardini, Executive Director of ICRC expressed his concern about politicisation of humanitarian aid by State and non-State armed groups that made humanitarian workers victims.

The diplomat said that the key principle of humanitarian action is neutrality, calling on countries to transform their commitments into actions and that humanitarian organisations should be the front line who reach and support people in the conflicts.

UNSC member states affirmed their commitment to ensuring the safety of humanitarian personnel, urging the creation of unhindered humanitarian access as well as the investigation and jurisdiction of violations of the humanitarian law.

They also exchanged opinions on the situation of some conflict zones and measures to strengthen the role of the UN Security Council there.

60 Years of Pain: Exhibition on the Lingering Effects of Agent Orange