Vietnam has become the 111th member of the WIPO Performances and Phonograms Treaty (WPPT). 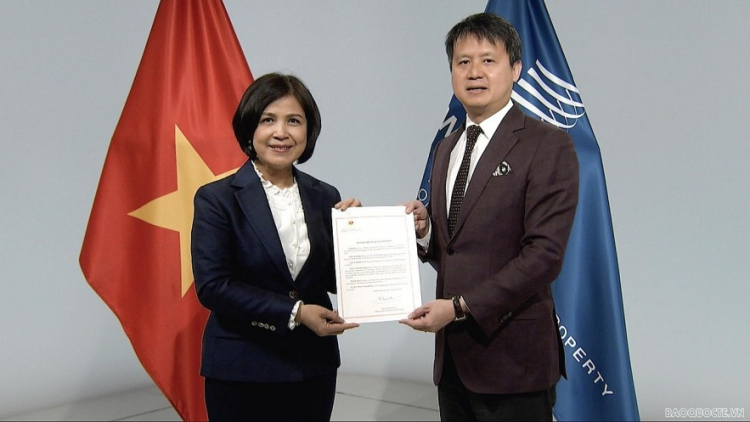 Ambassador Le Thi Tuyet Mai, Permanent Representative of Vietnam to the UN, WTO and other international organisations in Geneva, handed over the instrument of accession to the WPPT to Director General of the World Intellectual Property Organization (WIPO) Daren Tang. Photo: The Vietnamese mission in Geneva

Ambassador Le Thi Tuyet Mai, Permanent Representative of Vietnam to the UN, WTO, and other international organizations in Geneva, handed over the instrument of accession to the WPPT to Director-General of the World Intellectual Property Organization (WIPO) Daren Tang in the Swiss city on April 1.

Vietnam’s accession to the WPPT and implementation of the pact is expected to promote the development of the local cultural industry, the ambassador said, as cited by VietnamPlus.

She added that the treaty will especially boost the cinema and performing activities to contribute to Vietnam’s socio-economic growth.

The WPPT deals with the rights of performers and producers of phonogrammes, particularly in the digital environment.

Tang, for his part, congratulated Vietnam on joining the WPPT, emphasizing that the accession is a testament to Vietnam's strong response to its commitments to the global intellectual property system, while helping strengthen the protection of the related rights.

The joining is expected to also lead to increased employment and opportunities for the nation’s creative industry, he added.

On the sidelines of the event, Ambassador Mai had a meeting with Tang and two WIPO deputy directors-general Sylvie Forbin and Hasan Kleib to discuss the implementation of cooperation contents agreed upon between Vietnam and WIPO during the working visit of President Nguyen Xuan Phuc to the organization in November 2021. The WIPO leaders pledged to work closely with Vietnamese competent agencies to quickly and successfully conduct the contents.

Last year, Vietnam also became a signatory to the WIPO Copyright Treaty. The accession not only meets the country's commitment in a number of new-generation free trade agreements to which it is a member but also provides an effective legal foundation for the protection of copyrights on digital platforms, Nhan dan (People) newspaper said./. The headquarters of the World Intellectual Property Organization (WIPO) is pictured in Geneva, Switzerland. Photo: WIPO

The WIPO Performances and Phonograms Treaty (WPPT) deals with the rights of two kinds of beneficiaries, particularly in the digital environment: (i) performers (actors, singers, musicians, etc.); and (ii) producers of phonograms (persons or legal entities that take the initiative and have the responsibility for the fixation of sounds). These rights are addressed in the same instrument because most of the rights granted by the Treaty to performers are rights connected to their fixed, purely aural performances (which are the subject matter of phonograms).

The term of protection must be at least 50 years.

The enjoyment and exercise of the rights provided for in the Treaty cannot be subject to any formality.

The Treaty is open to States members of WIPO and to the European Community.

The Assembly constituted by the Treaty may decide to admit other intergovernmental organizations to become party to the Treaty. Instruments of ratification or accession must be deposited with the Director General of WIPO.

A total of 303 Sri Lankan nationals whose boat faced a serious incident in the waters...