Describing COVID-19 as a non-traditional security challenge, Vietnamese Deputy Minister of Foreign Affairs Le Hoai Trung urged all actors to heed the Secretary-General’s call for a global ceasefire at a high-level debate on November 3. 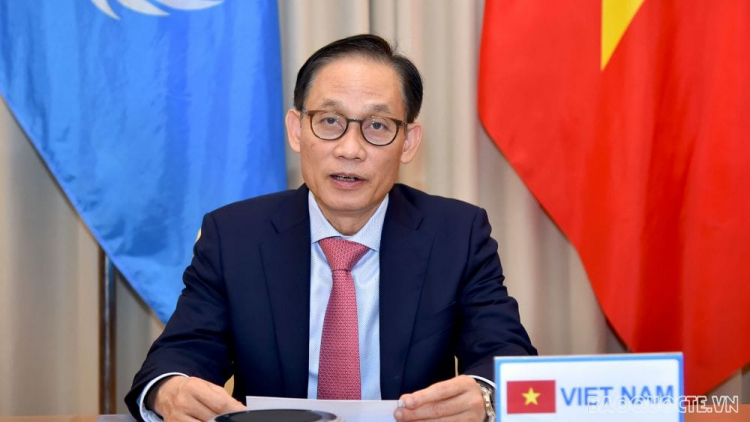 The 15-member Security Council convened on November 3 for a high-level open debate on "Peacebuilding and Sustaining Peace: Contemporary Drivers of Conflict and Insecurity".

The virtual debate was presided over by Ralph Gonsalves, Prime Minister of Saint Vincent and the Grenadines, which holds November’s presidency, and attended by UN Deputy Secretary-General Amina Mohammed.

Trung has stressed the need to foster friendly relations among countries and observe the UN Charter and international law, including the 1982 UN Convention on the Law of the Sea (UNCLOS).

The international community has been confronting major threats and challenges stemming from the disrespect for and violations of the core principles of the UN Charter and the UN General Assembly Resolution 2625 on “The Declaration on Principles of International Law concerning Friendly Relations and Cooperation among States,” Trung told the UNSC’s virtual debate on “Peacebuilding and Sustaining Peace: Contemporary Drivers of Conflict and Insecurity.”

He particularly underscored the importance of the principles concerning sovereignty equality, no use of force or threat to use force, and settlement of international disputes via peaceful means.

Such disrespect and violations are behind tensions, confrontations and conflicts all over the world, he said, citing the interference in domestic affairs of states; the complex developments of arms race, notably in nuclear energy; and violations of the UNCLOS 1982 as examples.

Describing COVID-19 as a non-traditional security challenge, Trung urged all actors to heed the Secretary-General’s call for a global ceasefire, and member states to exercise restraint to stop escalation of tensions and hold dialogues to seek long-term solutions.

He went on to say that multilateralism must be further enhanced and the UN should play a central role in strengthening international partnerships to harmonise interests of member states and beefing up cooperation with regional organisations.

The UNSC must make the best use of available tools, such as preventive diplomacy, and improve the effectiveness of its peacekeeping operations, he said.

Additionally, the UNSC must address the root causes of conflicts and insecurity by engaging in all stages, from prevention, early warnings to proposing solutions for post-conflict recovery and sustainable development, the Deputy Minister added.

Vietnam rose from the ashes of war and became a middle-income country, he continued, together with other ASEAN member states, it is striving to develop a cohesive ASEAN Community of sharing and cooperation, a peaceful, stable Southeast Asia and a regional environment for friendship, partnership and prosperity.