Two Vietnamese women was recently selected by the Viscardi Center as one of 11 recipients around the world of the 2020 Henry Viscardi Achievement Award. The awards honor “leaders in the global disability community,” who have made significant contributions to improve the quality of life of people with disabilities. 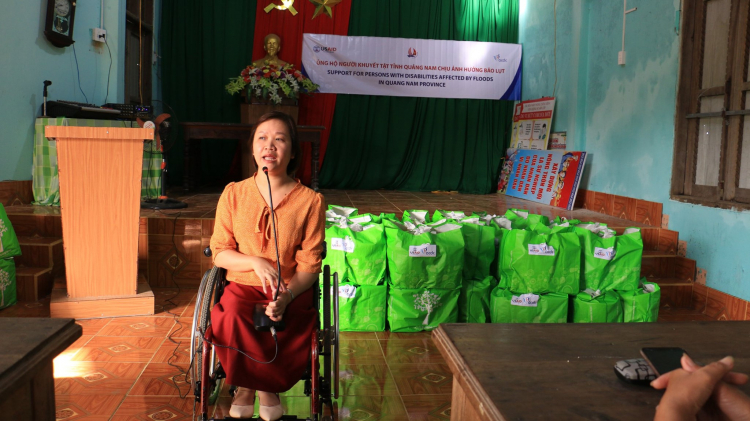 Nguyen Lan Anh provides relief aid for people with disabilities who have been affected by recent floods in Quang Nam province. Source: ACDC

As the founder and director of the Action to the Community Development Institute (ACDC) in Vietnam, Nguyen Lan Anh is a tireless advocate dedicated to empowering and including people with disabilities in all areas of life, particularly those impacted by poverty.

Among her many contributions, Lan Anh was a strong advocate behind Vietnam’s successful ratification of the Convention on the Rights of Persons with Disabilities in 2014. Lan Anh led her organization in successfully advocating for sign language translation to be provided not only on late-night television programs, but in the official news hour of the state television channel during the COVID-19 pandemic. She pushed for improved access policies, such as the Vietnam standard criteria, universal design in transportation, and the amended Labor Code.

Since 2013, Lan Anh’s legal clinic has been providing free legal counseling services on disability issues. Over the last five years, legal counseling and information services have reached 29,000 people, of which 18,000 are people with disabilities and their family members. Duong Thi Van has been devoting her life to eliminating the gap between people with and without disabilities in Vietnam.

Meanwhile, Duong Thi Van is the founder and Chairwoman of Hanoi Association of People with Disabilities (DP Hanoi), Vice President of Vietnam Federation on Disability (VFD), mmber of the National Advisory Board of Vietnam National Committee on Disability (NCD), has been devoting her life to eliminating the gap between people with and without disabilities in Vietnam.

With strategic vision, she advocated for establishment of organizations, clubs, groups, and centers to better support those with disabilities. Under Van’s direction, DP Hanoi expanded its network into 48 organizational members and over 15,000 individual members. It co-operates with government’s agencies and national and international partners to raise awareness, conducts thousands of empowerment, vocational training, and job creation programs and services, and encourages full inclusion in arts and sports.

Being an effective and dynamic activist, Van contributed to the development of the United Nations Convention on the Rights of Persons with Disabilities in Vietnam, ratified in 2014. She was an active member in building and promoting the implementation of domestic policies such as the Ordinance on Disabled Persons, and Law on Persons with Disabilities.

These international Awards, first bestowed in 2013, recognize exemplary leaders within the disability community and their extraordinary societal contributions, while remembering the spirit and legacy of The Viscardi Center’s founder, Dr. Henry Viscardi, Jr., who himself wore prosthetic legs. As one of the world’s leading advocates for people with disabilities, Dr. Viscardi served as a disability advisor to eight US Presidents, from Franklin D. Roosevelt to Jimmy Carter.

Since inception, the Henry Viscardi Achievement Awards have drawn nominations from cities throughout the US and countries around the world. Nominations have included individuals with a wide range of disabilities from academia, health care, government, non-profit and corporate sectors.