Representatives of the Vietnamese communities in Australia held the draft documents of 13th National Party Congress in high regard, saying they have been thoroughly drafted with high coherence and combination of theory and practice, and consistency and innovation. 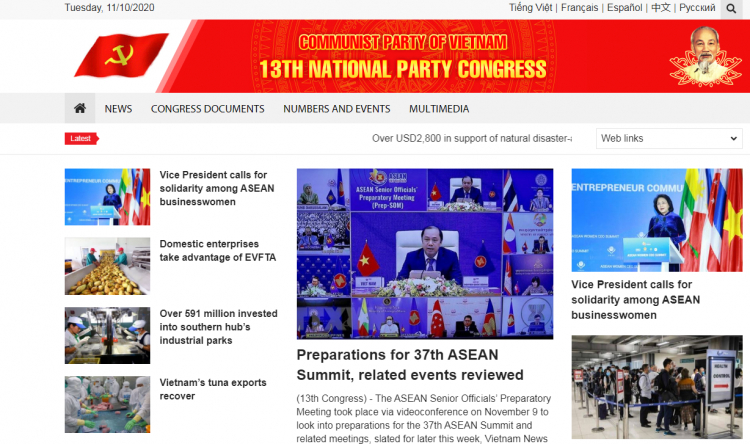 The official website of the 13th National Congress of the Communist Party of Vietnam (CPV) was launched on October 3, at http://daihoi13.dangcongsan.vn

The Embassy of Vietnam in Canberra (Australia) on November 7 just organized a virtual seminar to gather feedbacks of Vietnamese expats living in the country about the draft documents.

Most speakers held the draft documents in high regard, saying they have been thoroughly drafted with high coherence and combination of theory and practice, and consistency and innovation.

The documents made objective, comprehensive and specific assessments about the achieved outcomes and clarified limitations, weaknesses as well as their causes and lessons drawn, they said, adding that major viewpoints, policies and main solutions over the next five years, with a vision towards 2030 and 2045, have also been outlined towards realising the goal of  turning Vietnam into a developed, socialist-oriented country in the middle of this century.

The attendees suggested that more assessment be made about factors favourable for socio-economic development, thus strengthening the feasibility of the development goals in the next five years.

Some urged focusing more on attracting Vietnamese talents overseas and encouraging contributions of Vietnamese expats as a way to create a breakthrough in educational reforms and developing human resources for national development.

A representative of the student community urged specific solutions to foster a more dynamic, enthusiastic young generation and a special attention on the youth's role in each sector in the national socio-economic development strategy in the next 10 years as they are able to adapt to the rapid growth of science and technology.

The official website of the 13th National Congress of the Communist Party of Vietnam (CPV) was launched on October 3, at http://daihoi13.dangcongsan.vn, which serve as a forum to collect and respond to public feedback on Party congresses and draft documents to be submitted to the 13th National Party Congress, resolutely fight and reject wrongful allegations and sabotage plots by hostile forces.

The website, built and operated by the Communist Party of Vietnam Online Newspaper, is updating the latest news about Party congresses at all levels and the 13th National Party Congress. The news is being published in Vietnamese, English, French, Chinese, Spanish and Russian languages.

Remove barriers for accessing to social services by women living with and affected...

‘We are able’: Initiative improving access and retention of ethnic minority children