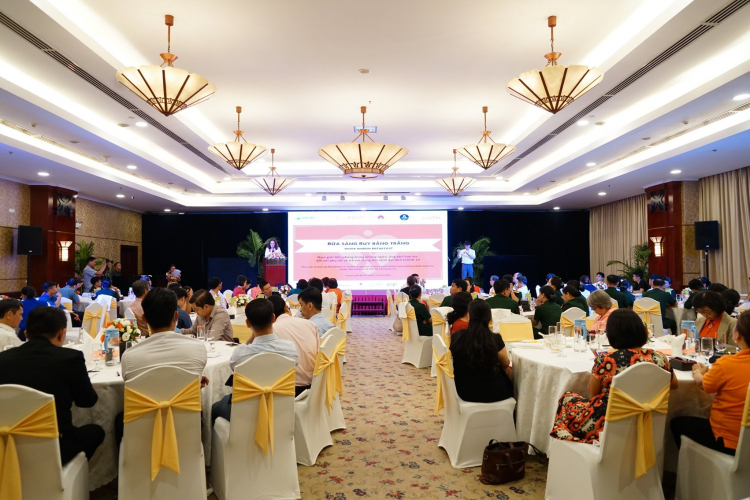 At the event. Photo: UNODC/Ngoc

One in three women worldwide is a victim of gender-based violence. In Vietnam, according to a National Study on Violence against Women published by the General Statistics Office in 2020, 63% of married women in Vietnam have experienced some form of violence in their lifetime. In the context of the COVID-19 epidemic, the proportion of women and children worldwide experiencing violence increased from 30% to 300%.

On the morning of November 23, "White Ribbon Breakfast - The role of men as frontliners in violence against women and children prevention and response under the context of COVID-19 pandemic" was successfully held by the Department of Labor - Trade Social Affairs and the People's Committee of District 1, the Department of Tourism of Ho Chi Minh City organize with support from UN Women and United Nations Office on Drugs and Crime.

The event aimed to promote the participation of men and the community in raising awareness about prevention and reduction of acts of violence, abuse and sexual harassment against women and children, especially in the context of the COVID-19 pandemic. This activity is a part of National Action Month on Ending Violence against Women and Children" and Global Solidarity Campaign 16 Days of Activism. 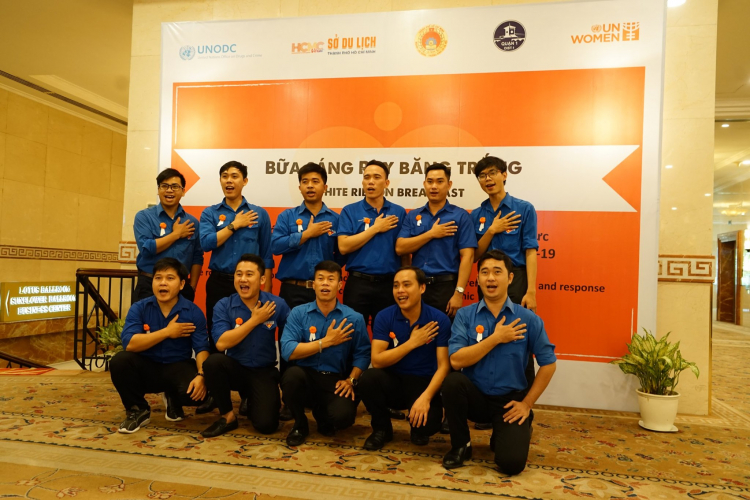 Vice Chairman of the municipal People’s Committee of HCM City’s District 1 Mai Thi Hong Hoa called for greater engagement on the part of men to carry out measures ending gender-based violence, and affirmed that ensuring the safety of women and girls is important in building an equal and civilised society.

She said that images of doctors, armed forces, flight crews, volunteers, and service providers on the frontline in the fight against COVID-19 are valuable for communications campaigns, since they show both men and women providing a safe and friendly city for women and children.

Meanwhile, Elisa Fernandez Saenz, Country Representative of UN Women in Vietnam, stressed that men are the important agent for ending violence against women and girls.

She suggested communications campaigns focus on changing deep-rooted gender prejudice by encouraging men to help women with the housework and child care and to develop a respectful and non-violent relationship with women.

White Ribbon Campaign includes activities of prevention and fighting violence against women such as communications, education and programs for the youth in schools, at workplaces and in communities. The White Ribbon campaign was globally launched first time in Canada in 1991 and has now spread to more than 60 countries and became the largest movement led by men to mobilize men to end violence against women.

The United Nations General Assembly has designated November 25 as the International Day for the Elimination of Violence Against Women, it is also the opening date for the global campaign “16 Days of Activism against Gender-Based Violence” , this campaign ends at The International Human Rights Day (December 10) and was launched the first time in 1991.

Based on the vision that "All women live in safety free from all forms of men's violence," the White Ribbon Campaign originated in Australia in 2003 as part of UNIFEM (now UN Women). Since then, the campaign has positively engaged men as a part of the policy advocacy process to end violence against women and girls. The campaign starts from the International Day of the Elimination of Violence against Women (25 November) until the Human Rights Day (10 December).