2020 marks the 20th anniversary of United Nations Security Council’s Resolution 1325 on 'Women, Peace and Security'. The resolution has had a crucial role in raising awareness of women's rights as well as promote women's participation in decision-making processes, peace-building and post-conflict recovery. 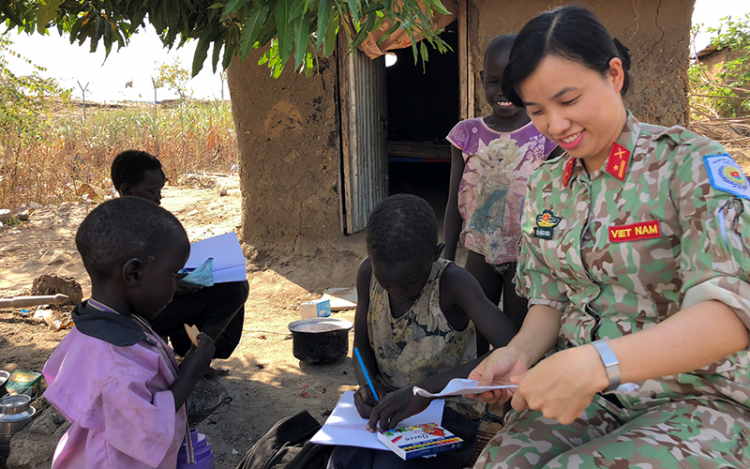 Twenty years ago, the United Nations Security Council passed Resolution 1325 on Women, Peace and Security, aimed at addressing the situation of women in conflict.

The United Nations Security Council (UNSC) adopted resolution 1325 on women, peace, and security (WPS) on 31 October 2000. The resolution reaffirms and emphasizes the contributions women make to conflict prevention, peacekeeping, and conflict resolution. As such, it urges actors to incorporate gender perspectives in all UN peace and security efforts and calls on parties of conflict to take special measures to protect women and girls from gender-based violence. In October 2010, the UN Secretary General (UNSG) proposed a 2011-2020 strategic framework to guide the UN’s implementation of the resolution.

The significance of UNSCR 1325 lies in the fact that it was the first time the Security Council addressed the disproportionate and unique impact of armed conflict on women. Since its adoption, the Council has met every year, typically in October, for an open debate on the implementation of the resolution. The debates are informed by the UNSG’s annual report on women, peace and security and frequently result in an outcome document to further the WPS agenda. Since the adoption of resolution 1325, the Council has adopted twelve resolutions, which together frame the women, peace and security agenda.

On 13 October 2015, the Security Council held a high-level review on women, peace and security to mark the 15th anniversary of UNSCR 1325. The review assessed progress at the global, regional, and national levels, addressed emerging obstacles, and renewed government commitment to the WPS agenda. To inform this discussion, the UNSG commissioned an independent Global Study on the resolution’s implementation, pursuant to resolution 2122 (2013). Consequentially, the UN Security Council reaffirmed its commitment to UNSCR 1325 by adopting resolution 2242, which aims to improve implementation of the WPS agenda and double the number of women involved in peacekeeping missions by 2020.

By 2016, 60 countries had drafted National Action Plans to increase women’s participation in peace negotiations, peace-building, peacekeeping, humanitarian response, and post-conflict reconstruction. In advance of the 2017 annual Security Council debate on the WPS agenda, the Women, Peace and Security Index was launched. The index is to be updated every two years and will track progress ahead of the 2019 HLPF and the 20th anniversary of resolution 1325 (October 2020).

In October 2018, the Council will convene its annual debate on the the implementation of resolution 1325 to discuss the six recommendations set forth by the Secretary-General’s 2017 report. In its six years of inavolvement in UN peacekeeping operations, Vietnam has sent 53 military officers to South Sudan and the Central African Republic, including four women. Photo provided by UNDP

In recent years, Vietnam has increased its engagement in global peacekeeping efforts. Vietnam has participated in UN peacekeeping operations since 2014. Officers have been sent on missions to the Central African Republic and South Sudan, including 126 officials, doctors and other personnel, at two local field hospitals, including 20 women.

In 2017, Vietnam sent the first female staff officer, major Do Thi Hang Nga, to join the UN peacekeeping mission in South Sudan. Currently, Vietnam has 10 female officers on duty in Level II Field Hospital, accounting for nearly 17% of the total 63 members of the hospital. This rate is higher than the set target of the UN.

Despite the difficulties in their daily lives, female officers of the People's Army of Vietnam in South Sudan and the Central African Republic not only fulfilled their duties but also proactively proposed to the UN Peacekeeping Mission many extra-duty activities to help local people, such as voluntarily teaching homeless children, donating gifts to the poor, and guiding local people on farming activities.

The COVID-19 pandemic makes their military lives even more challenging. In the Central African Republic, lieutenant colonel Nguyen Thi Lien, a training staff officer, took initiative to hire sewing machines, bought materials, sew over 500 facemasks and gave them, for free, to colleagues in the Peacekeeping Mission and the people of Bangui Capital.